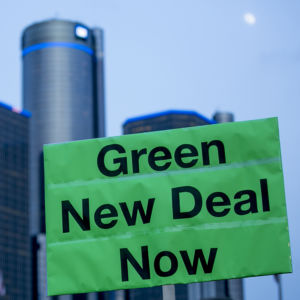 After the ravages of the coronavirus pandemic, the world will be spending trillions of dollars to get us back on track.

Increasingly, campaigners and influential policymakers demand this spending be tied to climate goals. International Monetary Fund (IMF) Chairwoman Kristalina Georgieva urges “we must do everything in our power to make it a green recovery,” and U.S. Democrats, the European Commission and many other countries are pushing “Green New Deals.”

These could cost us tens of trillions of dollars, and, unfortunately, will be one of the worst ways to help us recover.

The coronavirus pandemic has resulted in the loss of hundreds of thousands of lives and led to widespread disruption. According to the IMF, the loss could easily top $20 trillion this and next year. That is $20 trillion of food, healthcare and opportunities for people around the world that we can no longer afford.

Similarly, school closures have had little effect on the coronavirus, according to renowned medical journal The Lancet, but they have left the next generation less educated.

Because better-schooled children are more productive and help advance their countries, this will hamper the world’s growth for decades to come. Norway estimates that every day a pupil is out of school steals $160 from each child’s future. The World Bank estimates that current school lockdowns for 1.5 billion children have taken $13 trillion from these children’s future.

Now, nations will borrow trillions to help alleviate the current suffering. And we are told that a green recovery can quickly create plenty of jobs and economic growth, along with fixing the even bigger problem of climate change. This is mostly incorrect.

Climate change is a significant problem for humanity, and we need to tackle it smartly. But climate policies also have massive costs. Unfortunately, most current climate policies cost more than the benefits they deliver.

The Paris Climate Agreement is wasteful, as it will cost $1-2 trillion a year but reduce climate damages by just one-tenth of its cost. It will not fix climate, but reduce temperatures at century’s end by an almost immeasurable 0.3°F. Moreover, studies show it will increase poverty and quadruple European power prices.

The biggest studies of the 2050 European Green Deal show enormous costs of 1 to 2 trillion euros per year by 2050 just for Europe. This cost exceeds what governments across the European Union today spend on health, education and environment, yet it will only reduce global climate damages by less than one-tenth of its cost.

In the U.S., it takes 39 solar workers to produce the same amount of electricity as produced by one worker in natural gas. Hence, generating more solar power will create many more jobs.

But this is wasteful. Choosing to employ 39 people to do what one person could do means 38 people can’t help elsewhere in the economy, providing elderly care, education, better infrastructure and the thousands of other needs for society’s future.

Moreover, green spending works slowly and creates almost no jobs in the short run, when jobs are most needed. It also doesn’t help those who are affected the most. It generates green jobs in construction and manufacturing, whereas most job losses due to the coronavirus occurred in services.

Finally, subsidized jobs from green deals will have to be financed by higher taxes, leading to fewer jobs elsewhere. As the U.S. National Bureau of Economic Research concludes in a new study, overall employment effects from environmental policies “are likely to be small, especially in the long run.”

Sometimes it is suggested that going green will actually make us richer.

This not only fails the giggle test, it is also contradicted by the climate economic literature: energy is the main driver of economic growth, so making it less effective, less reliable and more expensive has real costs.

Maybe we should pick the growth-enhancing policies first?

To tackle climate, we need to spend less resources better on ramping up green investment to innovate the price of green energy down below fossil fuels.

But today, we need to spend most of our scarce resources on the urgent needs: investments in healthcare to tackle the huge backlog and increase resilience to future epidemics; getting children back on track and in school; and helping the billions worldwide who have less food, less income and more insecurity.

As we begin our global climb out of the coronavirus depression, we shouldn’t start by letting bad green deals make us poorer, help climate little and ignore the many other urgent needs of the world.