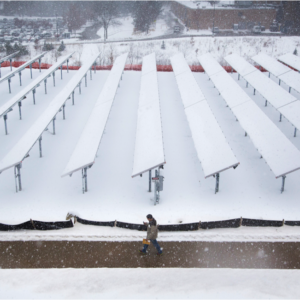 Green Where the Sun Doesn’t Shine

California is, literally, the sunshine state — especially the southern part of the state, where it’s sunny and warm almost every day of the year. So it makes a degree of functional (if not necessarily economic) sense to put solar panels on rooftops in Low Angeles or San Diego.

But it makes less of either sense in Massachusetts — and other Northeastern states — where it’s often not sunny for weeks on end, especially during the winter months.

And where it snows — sometimes feet of it at once — and doesn’t melt for months at a time. No sun — no lights. It makes no sense.

Without steady, dependable sunshine — and warm weather — a solar array is at best a part-time/seasonal energy source. Which means it’s a more expensive energy source, since it not only costs more and takes longer to recover the outlay cost of the array in the form of lower utility bills, it forces the homeowner to buy into two electrical systems — the solar array and grid power.

It’s of a piece with having to keep an internal combustion car as the backup car for the electric car because the EV can’t be depended on to do the job all by itself.

Two bills are in process (SB 1957 and SB 1995) that, if passed into law, will require contractors in Massachusetts to install solar panels on the roofs of almost all new construction private homes and government buildings in the state, regardless of economic or functional considerations, in order to “decarbonize” the building sector, in the words of Deborah Donovan.

Donovan heads something called the Acadia Center, one of several “environmental nonprofits” that favor the pair of Massachusetts bills. “We don’t want to miss any opportunities on buildings we’re going to be living with for the next 50 or 80 years,” she says.

Which may be about how long it takes for these government-mandated solar panels to pay for themselves. If they ever do.

The average cost to install a solar array capable of powering a typical 2,000 square foot single-family home is about $12,000, which is about twice the cost of a 50-year asphalt shingle roof for the same-size home.

Actually, it’s more than twice because the solar system won’t last 50 years and probably not even 20 (especially the storage batteries that will  have to be replaced long before then) and also because the solar roof is partly subsidized by federal and state tax credits (like electric cars), which means a part of the cost is hidden.

And probably paying more than would have been the case absent the legal requirement to buy the solar roof. Anything you’re forced to buy inevitably costs you more to buy because you can’t say no.

The obvious example being health insurance, which has more than doubled in cost for most people since it became something you have to buy.

Contrast this with computers, which cost less each year because people are free to not buy computers that cost too much. Which creates market pressure to reduce costs.

The mandating of “green” products — whether electric cars, LED lightbulbs, low-flush toilets or solar arrays — has had the perverse effect of undermining the economic case for these things, leaving aside the functional case. For example, the design focus of electric cars is primarily high-performance (e.g., the Ludicrous Speed touted by Tesla) with economy and efficiency taking a back seat.

This results in higher costs; which ends up making it necessary to mandate — and subsidize — the item in question because most people can’t afford it.

Take away the mandates and things like electric cars — and solar panels — would cost less and so be more popular.  And if they made functional and economic sense, people wouldn’t have to be forced to buy them.

But, that’s less profitable for the politically connected rent-seekers who stand to profit from the mandates and subsidies. Which likely explains the real reason for the mandates.

Green is literally green — in the cashflow sense.

This was practically conceded by another backer of the two Massachusetts bills: Mark Sylvia, who is the president of the Solar Energy Business Association of New England. He told Energy News Network reporter Sarah Shemkus that the solar panel mandate would “certainly accelerate” the recovery of the faltering solar panel industry in the state, which has 5,000 fewer people working in that sector today vs. four years ago.

It’s “faltering” because the people of Massachusetts have done the math — and noticed that the sun doesn’t always shine. They’ve elected to not to buy solar panels because they don’t make sense, economically or functionally.

Sylvia wants to make sure they’re no longer free to make that choice. “This absolutely will continue to support growth in the solar market from a jobs perspective,” Sylia said.

Per “The Godfather,” it’s hard to say no to an offer you literally can’t refuse.