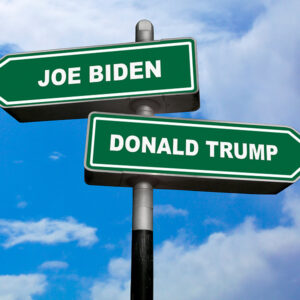 Grim Outlook for 2024 — a Biden-Trump Rematch

Even in a highly polarized country, there is common ground emerging around the principle that things aren’t going well. In a recent New York Times and Siena College poll, just 13 percent of voters believe we are headed in the right direction, compared to 77 percent who don’t. The sentiment is not just from predictable Republican partisans, either. In concerning news for the White House, only 27 percent of Democrats are happy with the current course.

It is becoming increasingly clear that neither the current president nor his predecessor is equipped to run the country.  All the ingredients are there for a wide-open presidential primary contest on both sides in 2024. With its first-in-the-nation primary — unless the Democrats decide to shift that responsibility to Delaware — New Hampshire will lead the nominating process.

Ahead of a damaging economic report showing gross domestic product falling for the second consecutive quarter, President Biden and his allies spent precious time scrambling to redefine the textbook term “recession.” Even after the ominous news, the White House claimed we are on the “right path.”

Biden continues pushing a green agenda to force an energy transition voters don’t want, and green technology can’t support. His restrictions on domestic energy production have contributed to soaring inflation that sent his poll numbers and our economic health spiraling.

He has been reduced to issuing tweets hailing the price of gasoline falling below $4 a gallon. Never mind the stubborn fact a gas still costs New Hampshire drivers more than $4, an increase of more than 80 percent since Biden’s inauguration.

Meanwhile, Granite Staters are bracing from a recent announcement that electricity prices are about to spike — before the cold winter months and the accompanying high heating bills.

Against this political backdrop, the Republican Party is licking its chops ahead of the midterms. New Hampshire’s all-Democrat congressional delegation should be vulnerable. Unfortunately, our most recent president is still making headlines about the election he lost two years ago, diverting valuable attention from a forward-looking vision.

The January 6 hearings concluded with a vivid recounting of the 187 minutes that Trump sat on his hands while the Capitol was under siege. It stung from searing critiques on the editorial pages of the Wall Street Journal and New York Post, two of the nation’s most prominent right-of-center voices. The Post flatly stated, “Trump has proven himself unworthy to be this country’s chief executive again.”

Yet that is precisely what Trump is preparing to do, according to recent media reports. There are even rumors circulating that Trump will announce his 2024 bid before the dust has settled on 2022.

Even with both parties needing a reset, the conventional wisdom is predicting a Biden vs. Trump rematch in 2024, pitting an 82-year-old against a 78-year-old. It’s the contest that no one wants, yet everyone expects.

To chart a course forward, the next GOP standard-bearer must build on the successful accomplishments of the Trump presidency — the Supreme Court, tax cuts, energy security — and leave behind personal grievances and conspiracy theories. Project a vision of strength into the future without a constant relitigating of the past.

On the GOP side, the process will start in the Granite State. Less clear is how events will unfold for the Democrats as they attempt to wrangle their national base seeking to destroy New Hampshire’s place atop the calendar — or at least delay it until after the midterms.

Either way, the shadow primary is underway. Let’s hope conservatives get it right because the country cannot afford an additional four years of Biden or the status quo.

Geoff Duncan is the lieutenant governor of Georgia and the founder and author of “GOP 2.0: A Better Way Forward.” He wrote this for InsideSources.com.