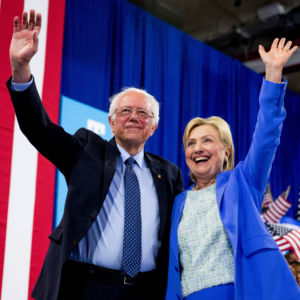 Did We Miss a ‘Groundbreaking’ Quote at Clinton’s Sanders Rally?

“I feel like it’s Christmas in July,” Andrea Dew Steele says immediately. “I’m over the moon.”

The president of Emerge America is mixing metaphors here, and you can hardly blame her.

It’s just that her ebullience doesn’t come from where you’d expect.

For Steele, whose national organization recruits and trains women to run for office as Democrats, there’s special excitement about a little-noticed quote from Clinton’s remarks — and that’s what got her all “Hey Diddle Diddle.”

“I have met so many impressive people here in New Hampshire and across America with great ideas for our country,” the presumptive Democratic nominee said at one point. “I want to see you run for office and win.”

In an interview, Steele calls this nothing short of “groundbreaking” and “wildly exciting.”

“It’s very gratifying to hear,” she says, noting that since her early days on the Michael Dukakis campaign she can’t remember a candidate encouraging Americans to compete in the political arena in this way.

Clinton is also drawing praise from Emily’s List, the well-known national political action committee that seeks to elect pro-choice Democratic women, and Eleanor’s Legacy, a group with a similar mission based in New York.

In a statement, Emily’s List’s executive director, Jessica O’Connell, says the former secretary of state is “a powerful voice in encouraging more people to step up and run for office.”

“Women like Hillary help break down barriers for other women because she helps them see themselves in elected office,” O’Connell says. “We need more women to run and we need them to encourage their friends, neighbors and daughters to run — and Hillary Clinton is leading the way on this.”

Similarly, Brette McSweeney, Eleanor’s Legacy’s executive director, says in a statement that Clinton’s comments are a “huge boost to all of us working to recruit and train candidates at the state and local level.”

Erin Loos Cutraro, CEO of the nonpartisan She Should Run, says in a statement it’s “really encouraging” and Clinton is “a living example of what’s possible.”

Laquan Austion, a former Republican strategist now CEO of the bipartisan Action for America, says in a statement that he was inspired by Clinton, but not without caveats.

“I am inspired by those remarks,” Austion says. “It is unfortunate, however, that the current gridlock and political gamesmanship is no example of leadership or anything any reasonable person would seek after.”

One policy Clinton is proposing to entice more prospective candidates is a small donor-matching system she says will “make it easy for more Americans to be elected at every level of government.”