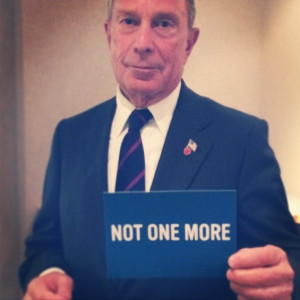 Gun Control and the Midterms: An Interview with Joyce Lee Malcolm

Despite the push for stronger gun-control measures that was made after Sandy Hook, the prospect of Congress passing legislation anytime in the near future is virtually zero. The issue, however, has received several headlines over the past few weeks, and there are indications that it may have some sway over voters in the midterm elections.

Earlier this week, Everytown for Gun Safety, the gun-control advocacy group founded by former New York Mayor Michael Bloomberg, announced it was beginning to ask candidates for federal office to submit a 10-part questionnaire detailing each candidate’s stance on issues like expanded background checks and reduced magazine capacity. Bloomberg has said he will spend $50 million to influence the gun control debate ahead of this year’s elections. That’s more than double the NRA’s annual budget for political campaigns.

Gun control has garnered other headlines this week. New Jersey Governor Chris Christie faced criticism following his veto of a bill to limit magazine size. The Governor was forced to explain why he declined to meet with the parents of Sandy Hook victims.

Also, a report from the Associated Press indicates that some states are turning to gun-seizure laws to take guns away from those who may be a threat to themselves or others. Some argue the practice is often abused by authorities with the courts turning a blind eye.

There is some indication that these issues may have an impact in this year’s elections. A Politico poll from May found 79 percent of those surveyed, including 71 percent of Republicans, support stricter background checks prior to a firearms purchase. Respondents indicated the issue would be “important” to them when they vote.

In order to provide our readers with an understanding of how these issues may influence the midterms, InsideSources spoke with Joyce Lee Malcolm, the Patrick Henry Professor of Constitutional Law and the Second Amendment at George Mason University School of Law. She’s an expert on gun control, and her work was cited in the U.S. Supreme Court opinion in District of Columbia v. Heller.

INSIDESOURCES: Mayor Bloomberg is asking candidates for federal office to submit a ten-part questionnaire detailing their stances on a range of firearms issues. Gun control advocates believe this is an opportunity to fill a void opposite of the NRA and its rating system. Do you believe this enhances the debate over gun control leading up to the election?

JOYCE LEE MALCOLM: Asking candidates for federal office to explain their views on issues related to the right to be armed is useful and might help have a more focused debate. Of course the nature of the specific questions is key. Since the ultimate aim is public safety, I would hope that the questions actually address the impact various measures might have on the safety of their constituents and their ability to protect themselves rather than resorting to use of vague terms like “assault weapons” or use of background checks for gun purchases without specifying what new sorts of questions such background checks would include.

[IS]: Some are questioning whether the survey and Bloomberg’s $50 million of funding for gun control advocacy is going to help or hurt Democrats leading up to the midterms. How do you see this affecting voters as they go to the polls?

MALCOLM: Most candidates of the Democratic Party are not going to be pleased at having to respond to this questionnaire.  The gun issue has been toxic for them. Al Gore made a big issue of enhanced gun control when he ran for president and it hurt him. John Kerry, by contrast, had himself photographed in a duck hunting outfit.  Obama was cautious on the issue until after his election. Congress failed to pass any new gun control measures after the Sandy Hook massacre. Why? Because millions of Americans feel deeply about their right to be armed. Being on record in favor of curbing that right will not win elections in most of this country.

[IS]: A Politico poll in May found that Democrats, Independents, and Republicans all strongly support stricter background checks for gun purchasers. Why won’t Congress act on this issue, and will Bloomberg’s financial support have an effect on driving this debate forward?

MALCOLM:The majority of Americans would probably like to see a background check for gun purchasers that filters out individuals who are mentally disturbed to the point of being a danger to themselves and others. But simply asking whether you want stricter background checks would not necessarily make that distinction as opposed to including various questions that are an invasion of privacy. I think members of Congress haven’t acted on the issue for a range of reasons. Those in favor of gun rights are afraid of more intrusive, open-ended and subjective questions intended to deter gun purchasers. Those opposed to gun rights are afraid of upsetting constituents. Health care professionals fear the questions will stigmatize people with a range of problems but who aren’t dangerous to anyone. Anyway, will someone who wants to misuse a weapon actually take a background test of any sort?

[IS]: Turning to a slightly different topic, a report this week from the Associated Press points to a rise in the use of gun seizure laws by states looking for policies that could prevent mass shootings. Some have stated that the practice is being abused without due process. Do you believe we will continue to see these laws used to seize weapons, and are courts providing adequate oversight?

MALCOLM: I think we will probably see further use of gun seizures by officials and police. There is a legitimate reason to take weapons from individuals convicted of violent crime. But the practice can and has been misused to confiscate the legal property of people without due process. We have to monitor this type of law very carefully to ensure that does not happen.