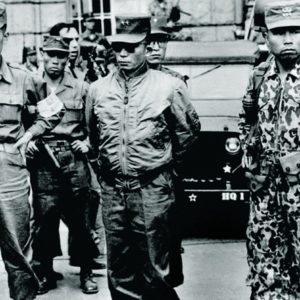 The stories of the 10 days of defiance, of suffering and bloodshed live on in a city that still seethes with resentment 40 years after the uprising that began with a student demonstration on May 18, 1980.

A generation or two has grown up since, but the tales are enshrined in two major museums here, one at the old provincial government building that the students and others had taken over as their headquarters, the other at the May 18 Memorial Park where the remains of more than 200 of those killed in the massacre are buried.

Other museums and displays around the city mark the places where the soldiers attacked, where people were killed, where protesters acted out their grievances for accumulated wrongs by military leaders responsible for dictatorial rule. Together they tell the story of the massacre, day by day, hour by hour, in words, photographs, artifacts and other imagery.

The tragic saga is sure to endure in the minds of those who visit many years later, but the story is not over.

Now President Moon Jae-in has ordered an investigation intended to come up with more answers. Who, exactly, ordered the soldiers to open fire, not only in the final assault on the provincial building but in isolated shootings, in seemingly random killing and wounding, over the entire 10 days between May 18 and May 27?

Moon, as he explained in a speech on May 18 in front of the government building, believes “as truth is revealed to the world piece by piece, the pent-up agonies in hearts will be relieved one by one, and we will be able to move toward the path of forgiveness and reconciliation.” There will, he said, be no reason “for distortion and denigration.”

It’s unlikely this investigation, in its broad outline, will go much beyond what’s already clear from exhibits that are open for everyone, but the details should really be interesting.

It so happens, two or three days before May 27, 1980, that I visited the provincial building where protesters had established their headquarters.

They were eager to publicize what they were doing. Someone there issued me a press card. An official gave an impassioned briefing to several of us, including Bill Chapman of the Washington Post and Norman Thorpe, who covered the entire 10 days mostly from inside the city for the Asian Wall Street Journal.

The next time I was there, a day or two after the army had regained complete control, I saw coffins around the entrance to the building. There was a deathly silence, then outbursts of grief from family members discovering loved ones.

I’m pretty sure those whom I met earlier did not survive the onslaught, but I’ve always wanted to know exactly what happened to them, who was responsible for the killing. Maybe, as a result of this final investigation, the truth will be known. Did then-President Chun Doo-hwan personally issue the “open fire” order? The answers to some of these questions are already known, but for sure there’s a lot we don’t know.

Another question: What was the American role? For sure, the Americans were caught flat-footed. They hadn’t known what was coming and didn’t know what to do about it.

The American general, John Wickham, technically had operational control over all forces in Korea, but Chun had only to notify him of the removal of a division of troops and send them to Gwangju and Wickham couldn’t stop him. Or so he said.

The U.S. position has been the uprising was an internal matter. Americans didn’t like the response of their Korean ally, but there was nothing they could do.

Wickham has said he had not imagined Korean troops would fire on Korean civilians. If nothing else, the investigation might come up with more evidence of American incompetence, which would not be surprising.

An American Peace Corps volunteer, Paul Courtwright, has chronicled, all these years later, what he saw in a book called “Witnessing Gwangju,” just published in English and Korean versions by Hollym. It’s an enthralling read, not only from what he remembers of the violence but also from his descriptions of Korean life, his conversations with ordinary Koreans and other Peace Corps types.

He also provides other details that might be of interest — for instance, that helicopters had opened fire, all denied by Chun.

The Gwangju uprising was brief. There have been far bloodier episodes in Korean history. Nonetheless, as a definable event, within a precise frame, experienced and witnessed by many, the tragedy endures as a point in time that scholars and investigators will want to study for years to come.

Far from being forgotten, relegated to some dark closet of the past, Gwangju lives on in the minds of those who never saw it but still want to know how and why it happened.