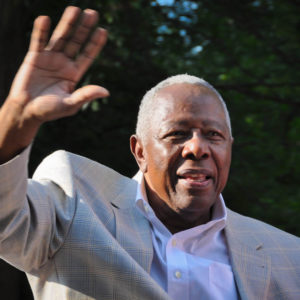 Hank Aaron’s Unlikely Link to a Hall of Famer

When Hank Aaron died suddenly on January 22, he took with him the last chance to tell one of the meatiest intergenerational of racial baseball stories.

The subject is what Alabama-native Aaron (1934-2021), number two on the all-time home run list, really thought of fellow Hall of Famer Georgia-native Ty Cobb (1886-1961), the all-time hits leader until 1985.  For helping to advance his career, Aaron had reasons to think highly of Cobb. Plus, he no doubt heard gobs of mostly positive things from Cobb’s, hands-down, greatest baseball friend: Fred Haney, Aaron’s 1956-59 manager on the Milwaukee Braves. Haney had played under Cobb in the 1920s and led the Braves to the 1957 World Series title.

But from others around baseball, Aaron likely heard reams of negative stuff.

For example, it was likely passed down to him, especially through former Negro Leaguers, that Cobb, arguably the most hated huge white star in pre-steroids baseball, had gotten into fights with Blacks off the field. Cobb did get into some fights with whites too, but without race as a potential complicating factor. Aaron is also likely to have heard something along the lines of what the Chicago Defender said about him in 1949: “Cobb, a rabid race-baiter, with very pronounced prejudices against Negroes, never would play against them even on barnstorming tours.”

The potentially top case study for that involves one of the top Black pitchers of the early 20th century, Richard “Cannonball” Redding. In an exhibition game in Connecticut in 1916, when the opposing team inserted Redding in the fifth inning, Cobb exited by prior agreement. Redding played until 1932 and lived until 1948. He also had been born in Atlanta, which is where Aaron spent much of the rest of his life starting in 1966, when the Braves moved there.

Cobb’s only other known playing encounter with Blacks had been in the offseason of 1910-11, in Cuba.  Cobb arrived late and missed seven of the 12 games. While American Blacks played on one Cuban team, none were pitchers. That said, one of the U.S. Blacks, catcher Bruce Petway, became a legend among Black baseballers for throwing out Cobb twice one day, first on a bunt and later on a try to steal second base. (His feat got incorrectly changed to read that he threw out Cobb three times in a single game on steal attempts.) Based on that experience, Cobb may have vowed not to face Black players again.

Cobb racial negatives that Aaron may not have heard of include that he had thrown balls at the head of a live Black man in 1911, in the popular amusement game African Dodger. Also, Cobb had made anti-baseball integration comments in the early 1940s, based on a first-hand recollection in 1946 by Bill Cunningham of the Boston Herald, one of the highest-paid sportswriters of the day.

In sharp contrast, Aaron would have had a strong basis to have appreciated Cobb starting in 1952.  That January, a hot issue was whether the minor Texas League should now be integrating.  Cobb, in an interview with the Associated Press, came out in strongly in favor. The Texas League did end up integrating that year, with the South Atlantic (Sally) League doing so in 1953 – with Aaron as one of its five Black players. Cobb had played in that league close to 50 years earlier.

Then, in 1954, Aaron likely strongly appreciated Cobb for advocating for him before his first big league season, in Milwaukee. At a sportswriters’ dinner, “I was with Cobb for more than an hour and he talked about Aaron most of the time,” manager Charlie Grimm told Milwaukee Journal sportswriter Sam Levy.  “Ty claims that Aaron is one of the best young ballplayers he has seen in many years.” Grimm said Cobb told him, “What I like about that kid is his hitting. The first time I looked at him, I said, ‘There’s a great hitter,’ because of his mannerisms at the plate.”

Besides meeting in 1957 thanks to Cobb’s friendship with Haney, Cobb and Aaron definitely met at least one other time, in January 1958, at a baseball dinner in New Hampshire.

Beside plying Haney with advice letters, Cobb made a visit to the Braves during the season. A photo survives of him giving batting instructions to a mesmerized-looking Aaron and a few of his teammates.  There even was a stretch in that season when Aaron, fellow future Hall of Famer Eddie Mathews and fellow power hitter Joe Adcock were doing lots of bunting – something that Cobb was a big proponent of.  “Evidently Fred Haney still hero-worships Ty Cobb – and his theories of baseball,” one sportswriter wrote.

Howard W. Rosenberg is the author of the 2018 book “Ty Cobb Unleashed: The Definitive Counter-Biography of the Chastened Racist.” He is also the author of a four-book series on 19th-century baseball.