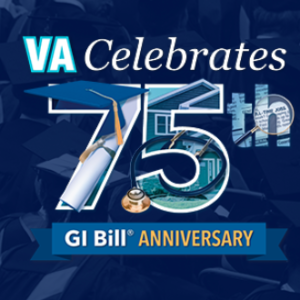 The original GI Bill nearly died in Congress because some lawmakers thought it didn’t make sense to send millions of World War II Veterans to college.

Today, 75 years later, we know the opposite is true.

Those World War II Veterans, armed with access to education, health care and a home loan guaranty, went on to reshape the 20th Century, and were a major driver of our post-war economic boom.

Although unemployment benefits were included in the bill, less than 20 percent of the money allocated for that benefit was used. Instead, Veterans took the long view by investing in themselves. Almost half of those who returned from the battlefield, 7.8 million, used the GI Bill to go to college, trade school, or business or agricultural training. And America changed in lasting ways.

Suddenly, college in America would start to become more accessible to everyone. Veterans opened doors to education that millions would walk through in the following decades.

And Veterans didn’t just get by in these institutions – they thrived. LIFE Magazine reported in 1947 that Veterans were doing better than their non-Veteran counterparts.

“The veteran student is poor and hard-working,” LIFE wrote. “He has been around long enough to make subjects like geography tough to teach. He wants a fast, business-like education and is doing his best to see that he gets it. He is getting better grades than the non-veteran and has forced higher standards on everyone else.”

Flush with this success, the GI Bill has been updated several times to refine Veterans’ benefits, mostly recently by President Trump, who signed the Forever GI Bill into law in 2017.

Why do we still need it today? Because America’s Veterans have shown time and time again that they are a good investment, and that they keep giving back to America and help build strong communities. They continue to provide leadership and strong character for others to emulate.

When a U.S. Army convoy hit an IED in Iraq in 2009, it had a lasting effect on Nathan Goncalves, even after he was discharged from the military.

“I was broken, I was scared, and I was angry at the world,” he said.

But when Nathan became a father in 2012, the GI Bill helped him turn his life around. He used the Post 9/11 GI Bill to attend community college, transferred to UCLA, and graduated with a 3.8 grade point average.

Later, a Department of Veterans Affairs counselor helped him pursue a law degree, which he received from UCLA in 2018.

When this humble young man passed the California Bar last month, he said to the VA, “We did it.” And he’s already working to pay his good fortune forward by working to help homeless Veterans around Los Angeles.

Veterans are often quick to thank the VA – and by extension, Americans – for the help they get through the GI Bill. Another one told the VA recently that the GI Bill “saved my life.”

But our 75 years of experience with the GI Bill shows this important domestic policy is about much more than showing Veterans “the American people do not intend to let them down,” as President Franklin Delano Roosevelt put it when he signed the bill on June 22, 1944.

What we’ve really learned is this:

When America invests in Veterans, everyone wins.