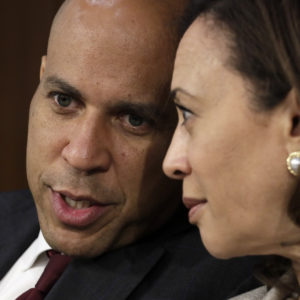 Sen. Cory Booker, D-N.J., left, and Sen. Kamala Harris, D-Calif., speak together on the last day of the Senate Judiciary Committee's confirmation hearing for President Donald Trump's Supreme Court nominee, Brett Kavanaugh, on Capitol Hill in Washington, Friday, Sept. 7, 2018. Booker and Harris, who joined the Senate Judiciary Committee just this year, have been diligent in grilling Kavanaugh and in eagerly joining fellow Democrats on the panel in calling for the release of documents related to vetting the nominee. (AP Photo/J. Scott Applewhite)
[IS] Opinions

We begin with the pronunciation. “It’s comma, and add a ‘luh,’ and you have Kamala.”

That’s what California Sen. Kamala Harris told us on the campus of George Washington University on Jan. 9 during the launch of her new book, “The Truths We Hold: An American Journey.”

Now, we know GW was only the beginning for Harris.

Not coincidentally, she chose Jan. 21 to announce her candidacy for the presidency of the United States. Her symbolism was that her announcement fell on Dr. Martin Luther King Jr.’s holiday.

And not coincidentally, New Jersey Sen. Cory Booker, the man who channeled his inner “Spartacus moment” during the Brett Kavanaugh U.S. Supreme Court hearings and espoused “radical empathy” as part of his campaign platform, announced his presidential candidacy on Feb. 1. His symbolism was that of the first day of Black History Month.

Harris broke the CNN-o-Meter on Jan. 28 in Iowa when she appeared during a town-hall meeting with anchorman Jake Tapper. CNN’s ratings with Harris were 75 percent higher than usual for the network’s 10 p.m. EST slot. And the under-35 crowd tuned in at almost quadruple the normal viewership — 186,000 to the usual 50,000 in CNN’s 10 p.m. hour.

OK, so what else do we know about Kamala Harris?

—She is the child of an Asian Indian mother and black Jamaican father, both of whom were immigrants.

—She giggles a lot.

—She emanates energy and charisma.

Some have labeled Harris and Booker as Barack Obama copycats. Obama Lite, if you will. That Obama comparison could be both a blessing and a curse.

Why? As Aaron Coleman, a New York University graduate student who writes commentaries about the intersection of race, politics and economics, penned in The Nation magazine, “In spite of his cultural competency, Obama’s tenure oversaw an economic recovery that left many black families behind and a proliferation of highly visible police brutality.”

Yes, Obama won two terms as the first black president, but many black folk feel he came up short on TRULY helping them in a practical sense. As opposed to simply being a symbolic, uplifting story as a presidential pioneer. That means Harris and Booker have to do more.

Regardless, Harris and Booker also are battling history in their presidential quest. As Arthur Cyr, professor of political science and political economy at Carthage College in Kenosha,

Wis., said: “A number of senators have become president, but only three have gone DIRECTLY from the U.S. Senate to the White House: Warren G. Harding (elected in 1920), John F. Kennedy (in 1960) and Obama (in 2008). Historically and currently, we are more likely to elect governors.”

Harris danced to rapper Tupac Shakur’s “California Love” during the walk-up to the dais from behind the curtains at her GW event. Yes, that book night on GW’s campus was fun and festive. But there is a serious, lingering question with Harris: Is she overdoing the black culture routine simply to gain racial identity points with folk of color who may view her through the lens of skepticism?

Will that routine provide her with cover/overcompensation to deflect said skeptics Because you have to figure Harris knows that probable black voters may have at least one possible point of contention with her: Her husband is white.

Douglas Emhoff is a 54-year-old accomplished attorney from the University of Southern California Law School who specializes in entertainment and intellectual property law in California and the District of Columbia. They met on a blind date and have been married for four years.

Why do we broach the subject of her interracial marriage? Because Obama also was a biracial candidate, just as Harris. But Obama was married to a brown-skinned, earth-toned woman. And you better believe that union endeared him to many black folk, especially among black women.

That is to say, for Obama, it’s no way in hell that he would have garnered 95 percent of the black vote if he had been married to a blond, blue-eyed white woman.

How all of these symbolic issues play out ultimately is up to the 2020 voters, especially those from the black side of town.