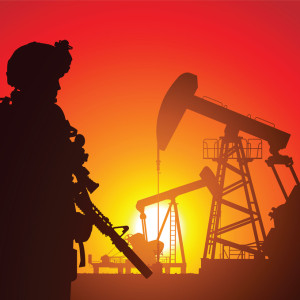 In 2003, supporters of the invasion of Iraq insisted it was not a “war for oil.” They pointed instead to dictator Saddam Hussein’s history of invading his neighbors, supporting terror, and pursuing weapons of mass destruction. President George W. Bush decried “sixty years of Western nations excusing and accommodating the lack of freedom in the Middle East, [which] did nothing to make us safe, because in the long run stability cannot be purchased at the expense of liberty.”

But whether or not the Iraq War was a war for oil, it’s undeniable it was a war about oil. One of the neighbors Iraq invaded was Kuwait, a leading oil-producing state. In the months before the invasion, he’d threatened Saudi Arabia — the world’s oil superpower at the time. And Iraq’s exploits brought threats to the Persian Gulf, the superhighway of the world’s petroleum supply.

Not to mention Iraq itself. At the time, Iraq was awash with rich oil reserves – the Department of Energy (DOE) estimated in 2003 that the nation had 112 billion barrels. In contrast, the United States was a relatively minor energy player in international markets.

So whether the cause was radical Islamic terror or nation-state military expansion or simply the threat of chaos across the Mideast, in 2003 America — and the West — had to keep the oil flowing.

Former Federal Reserve Chairman Alan Greenspan wrote in his 2007 memoir, “I am saddened that it is politically inconvenient to acknowledge what everyone knows: the Iraq war is largely about oil.” That same year, Nebraska Republican and former Senator Chuck Hagel told Catholic University law students, “People say we’re not fighting for oil. Of course we are,” while Gen. John Abizaid, former head of U.S. Central Command and Military Operations in Iraq, concurred that “of course it’s about oil; we can’t really deny that.”

Fast forward to 2019. Thanks to the fracking revolution, America was now the world’s largest oil producer. U.S. production is more than double what it was just a decade ago when U.S. commitment in Iraq was at a “surge” point with more than 135,000 boots on the ground. It wasn’t until 2018 and 2019 that America’s very own shale boom hit unprecedented heights, in which West Texas Intermediate (WTI) traded at a cushy $53 to $72 per barrel.

While rig and frac spread numbers dropped due to the impacts of the coronavirus pandemic, they are still symbolic of energy success compared to the previous decade.

“U.S. oil and natural gas production has made a significant contribution over the last decade to the U.S. and global energy security. It added liquidity to oil and gas markets,” observed Brenda Shaffer, a research faculty member of the U.S. Naval Postgraduate School and a senior advisor for energy at the Foundation for Defense of Democracies (FDD) in Washington, DC. “The surge in U.S. production during the first part of the last decade enabled the Obama administration and the Trump administration to remove Iranian oil from the market, without causing a major rise in oil prices.”

This shift in petro-power had led to a shift in foreign policy. Would the America of today intervene in the Middle East the way it did two decades ago? If the proxy war between Iran and Saudi Arabia currently being waged in Yemen were to directly threaten the Saudi oil fields, would 100,000 American soldiers be deployed?

“In my opinion, 80 percent of the reason for going in [in 2003] had to do with oil and the war machine,” said Carsten Pfau, economist and founder of the Agri Terra Group. “The Iraq invasion wouldn’t have happened if America had its energy dependence back then.”

Trisha Curtis, president and CEO of consulting firm PetroNerds, says the Iraq war “may or may not have happened in 2003 if the U.S. oil industry was booming and production was at the levels we see today.”

“Nations typically do not go to war for one reason and one reason as simple as oil,” Curtis contends, pointing out that U.S. companies did not do well in Iraq, nor did they have a heavy or exclusive presence. “Western intervention but more importantly, political stability, which doesn’t always happen with intervention and did not in this case, usually breeds a more stable ground to bring in Western companies, but not exclusively U.S. companies.”

Still, it’s hard to ignore the fact that U.S. foreign policy has been freed of the burden of energy dependence. America has more leverage to deal with a rogue Iran, whose threat to oil supplies and the Persian Gulf has been minimized; or an aggressive Russia, whose gas-pipeline politics can be countered by LNG tankers filled with products from Pennsylvania.

Which is why some foreign policy experts are raising an eyebrow over the Biden administration’s domestic energy policy: Blocking the Keystone XL pipeline, issuing executive orders limiting U.S. production on federal lands, and declaring the U.S. will reduce carbon emissions to 50 percent of 2005 levels by 2030. It’s also notable that, as Russia rattles its saber on Ukraine’s border, President Joe Biden has pointedly avoided taking action to sanction Putin’s Nordstream 2 pipeline.

“Oil and gas are still being used and produced, but the rhetoric against it is so strong that there is a risk that investors pull out too quickly and there are global shortfalls of investment. This means that there will be lopsided production around the world and the U.S. and western nations and Asian nations will most likely be increasing their imports from the Middle East and Russia,” Curtis surmised. “The broader geopolitical issues for global oil production are the increasing likelihood that stable nations with institutions and the rule of law end up reducing oil and gas output, reducing global energy security, and increasingly relying on imports from less stable and predictable regions of the world. ”

And, Curtis adds, spending trillions to build out renewables in the U.S. is, in many ways, an energy-wealth transfer to China.

“Increasing imports of renewable energy, across the supply chain of solar, wind, and battery, also exposes the U.S. to global energy insecurity and confrontations with China. China controls a vast amount of the raw material inputs for these renewable products, the bulk of the metals and minerals processing (which is very environmentally unfriendly), and the final exports of these products.”

This does not mean the U.S. will go to war for oil. It does, however, mean that peace and stability and potentially increasing fragility in the Middle East and other parts of the world could impact the U.S. and global energy security.