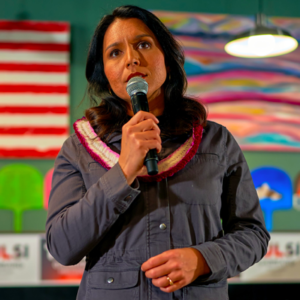 Hawaii’s Gabbard Has ‘Moved’ to NH. Now Dems Want Her to Be Able to Vote There

Democratic presidential candidate Tulsi Gabbard is so committed to winning the New Hampshire primary that she’s moved to the Granite State, renting a house in Goffstown, N.H.  Now that she’s moved in, the question has arisen: Should she be able to vote for herself here, too?

According to the New Hampshire ACLU, the state Democratic Party, Sen. Jeanne Shaheen and — oddly enough — Sen. Elizabeth Warren, the answer appears to be yes.  Tulsi Gabbard of Hawaii should be able to cast a vote in the New Hampshire presidential primary.

Gabbard’s decision has re-opened the debate over voting rights for people who are temporarily residing in a state–in particular a small state like New Hampshire which has both the largest number of college students per capita and an outsized role in American politics.

In 2018 when Republicans still controlled the state legislature, Gov. Chris Sununu signed a voting reform bill into law that specifically declared voters must be residents of New Hampshire, as opposed to merely “domiciled” here. “New Hampshire now aligns with virtually every other state in requiring residency in order to vote,” Sununu said in defense of the legislation.

As a result, people who are domiciled in New Hampshire — students, temporary workers, 2020 Democratic presidential candidates — must take actions to indicate actual residency, like getting a New Hampshire driver’s license or registering a car. Which means that, under current law, Rep. Gabbard wouldn’t be able to vote in the First in the Nation primary in February.

But what happens if the ACLU of New Hampshire, with the support of Sen. Elizabeth Warren and most of the 2020 presidential field, is able to get the law overturned? Could Tulsi vote “Gabbard 2020” in Goffstown?

“Yes,” says Republican state Rep. Barbara Griffin, “And I hope if she does, she votes for me, too!”

Griffin, one of the key supporters of the voting reform efforts, represents Gabbard’s new home/residence/domicile in the state legislature. “She’s got a lease agreement and a phone number. Under the old law, that’s all she would need.”

To some — particularly actual New Hampshire residents who own homes and pay local taxes and don’t want non-residents picking their city councilors or members of Congress — the idea of a congresswoman who currently represents a district seven time zones away voting in a New Hampshire election may sound crazy.  Is this really what the ACLU and progressive activists fighting to change the law want?

The ACLU-NH declined repeated requests for comment and refused to answer any direct questions about Gabbard’s voting eligibility. Sen. Shaheen, who urged every 2020 Democratic candidate to publicly oppose the new Granite State law, also declined to say whether she supports allowing Gabbard to legally vote for herself here.

Multiple sources inside state government who deal directly with voter eligibility and the new law told NHJournal that while there are legitimate questions about Gabbard’s voter status in New Hampshire, she almost certainly would have been allowed to vote legally under the old system.

“A person in [Rep. Gabbard’s] situation would not have been turned away,” one source told NHJournal.

It’s also worth noting that in Gabbard’s home state, would-be voters must pass a “residency” test as well. “The residence stated by the applicant cannot simply be because of their presence in the State, but that the residence was acquired with the intent to make Hawaii the person’s legal residence with all the accompanying obligations therein,” according to the state of Hawaii’s election’s office. Anyone making that claim falsely “may be guilty of a Class C felony.”

Why would New Hampshire, home of the all-important ‘First in the Nation’ presidential primaries, want lower standards for voter residency than an island state in the South Pacific?

Unfortunately for the ACLU-NH (and, theoretically, Rep. Gabbard), that’s unlikely to happen. Last month, a federal judge refused the ACLU-NH’s request for a preliminary injunction to block the law from being in effect for the First in the Nation primary on February 11.

For her part, Rep. Griffin says she has no problem with Gabbard voting in the #FITN primary–as long as she does it legally.

“Just register your car here in our town within 60 days,” she requests. “That’s more tax revenue for my town!”