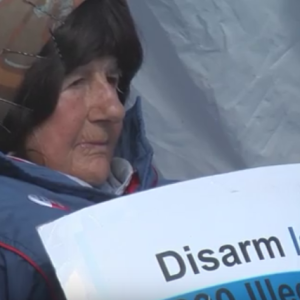 She Held Vigil Outside the White House for Decades. Watch This Look Back at Her Life in Protest.

Concepcion Picciotto, the Spanish-born peace activist whose three-decade vigil outside the White House was deemed the longest-running political protest in American history, died Monday, according to the Washington Post.

Back in 2013, I produced this video portrait of “Connie,” a woman who was at once an inspiration and an oddity, on some level admirable though clearly troubled. Longtime Washingtonians praised her tenacity and stalwart opposition to nuclear weapons, yet her anti-Israel rhetoric raised eyebrows, and one man close to her said she’d prefer the country didn’t exist.

Watch below to visit the quirky “peace house” where Picciotto once lived, hear fellow activists talk about her life’s work, and ultimately listen to her in own words.