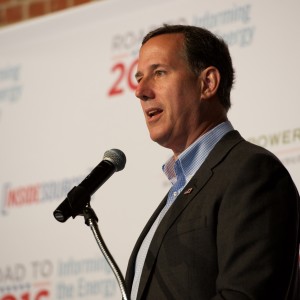 But that doesn’t mean they’re the only candidates worth hearing from, especially when taking into account the slim margin of error that separates the majority of candidates — most of whom reside in the single digits — in polls used to finalize the lineup.

Fiorina in particular has used her outlier status to position herself as the most viable and only female Republican contender capable of taking on Democratic frontrunner Hillary Clinton.

“Here’s the thing, in order to beat Hillary Clinton, or whoever their nominee turns out to be, we have to have a nominee on our side who is going to throw every punch because this is a fight,” Fiorina said during a forum with 13 other Republican candidates Monday. “It’s a fight for the future of this nation, it’s a fight for the character of this nation and, unfortunately we know that sometimes the right questions don’t get asked in a presidential debate.”

Fiorina, who has also painted herself as the most tech-savvy candidate in the 2016 GOP field, followed up her criticism of Clinton’s tenure at the State Department, particularly in regard to the 2012 attack on the U.S. consulate in Benghazi, on MSNBC’s Morning Joe Wednesday.

“Technology is a great tool that can be used to re-engage citizens in the process of the government,” Fiorina said. “It’s also a weapon that is being used against us, as we know, from all the data breaches from the Chinese. And Hillary Clinton, of course, doesn’t understand that technology well enough to know that her server has most assuredly been hacked because Secret Service Agents can’t protect it from being hacked.”

Fiorina isn’t the only underdog to set her sights on Democrats instead of fellow Republicans. Graham took time Monday to highlight his long tenure in Congress as evidence the South Carolina senator knows how to fight the leading Democratic political dynasty.

“As to the Clintons, I’ve been dealing with this crowd for 20 years. I’m fluent in Clinton-speak. You want me to translate that? When Bill says, ‘I didn’t have sex with that woman,’ he did,” Graham said in reference to former President’s Clinton’s affair with ex-White House intern Monica Lewinsky.

“When she says, ‘I’ll tell you about building the pipeline when I get to be president,’ it means she won’t,” Graham said of Hillary Clinton. “And when she tells us, ‘Trust me, you’ve got all the emails that you need,’ we haven’t even scratched the surface. So I understand this crowd, and I can beat them. And if we can’t beat them it doesn’t matter.”

Perry meanwhile has taken up a cause similar to some financially-focused Democratic wonks like Vermont Sen. Bernie Sanders and Massachusetts Sen. Elizabeth Warren, using a speech in New York last week as an opportunity to lay out his ideas for Wall Street reforms aimed at averting another financial crisis.

“If we want to truly end ‘too big to fail,’ we need to restore market forces to banking, where failure is not rewarded or bailed out,” Perry said at the Yale Club in Manhattan last week, adding Americans “were screwed” in the wake of the housing crisis and left feeling “that the game is rigged.”

Perry’s ideas include separating banks’ commercial lending and investment sectors and requiring them to hold more capital against leverages, two factors widely regarded among economists as significant drivers of the crisis, and major tenants of Warren and Sen. John McCain’s proposal to re-institute Glass-Steagall — the legislation implemented after the Great Depression and repealed in 1990s that imposed separation between investment securities and commercial lending.

Jindal became the first Republican in field to take significant action against Planned Parenthood this week over videos alleging the organization is illegally profiting from the sale of fetal tissue. The Louisiana governor cut off Medicaid funding to the women’s health organization Monday, the same day Republicans in Congress tried unsuccessfully to advance a bill doing the same.

“Planned Parenthood does not represent the values of the people of Louisiana and shows a fundamental disrespect for human life,” Jindal said in a statement. “It has become clear that this is not an organization that is worthy of receiving public assistance from the state.”

Jindal also showed up for Monday’s forum, where he called on fellow candidates to unite against Democrats instead of dismantling one another.

“I’m so tired of this president and the left trying to divide us,” Jindal said. “We’re all Americans. We’re not hyphenated Americans.”

The Santorum camp responded to Tuesday’s lineup announcement with an attack on Fox and the Republican National Committee, both of whom “should not be picking winners and losers,” according to the campaign.

“That’s the job of the voters,” Santorum’s campaign communications manager Matt Beynon said in a statement. “The idea that they have left out the runner-up for the 2012 nomination, the former four-term governor of Texas, the governor of Louisiana, the first female Fortune 50 CEO, and the three-term Senator from South Carolina due to polling seven months before a single vote is cast is preposterous.”

Thursday’s 9 p.m. ET debate will be preceded by a 5 p.m. forum featuring the remaining candidates.