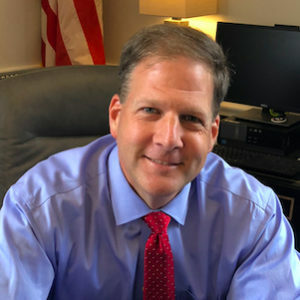 That was the word racing through New Hampshire political circles this week after a Politico article laid out the fullcourt press D.C. Republicans are making to recruit Gov. Chris Sununu for the 2022 U.S. Senate race.

The report broke little new ground, other than a previously unreported New Hampshire trip by National Republican Senatorial Committee (NRSC) chief Sen. Rick Scott (R-Fla.) to personally lobby Sununu. However, it reflected a growing sense from the ranks of local Republicans that Sununu is getting over his reluctance about being a D.C. legislator and is ready to challenge first-term incumbent Sen. Maggie Hassan next year.

“Six weeks ago, I would have said he was leaning against it. But he sure sounds like someone who’s running,” one longtime NHGOP insider told InsideSources.

“What the hell is he doing [expletive] all over the delegation if he isn’t going to run?” said another. “What’s the point?”

Sununu has been noticeably more aggressive in his attacks on Washington politics and, more significantly, in calling out President Joe Biden — who carried New Hampshire last November by nearly eight points. (Sununu outperformed Biden by 91,000 votes.)

On Monday morning, he appeared in a Fox News report throwing down on the White House’s poor communications regarding changing guidance on wearing masks.

“Due to the inconsistent, convoluted, and ever-changing guidance (and) messaging from President Biden’s CDC, the confusion from businesses and schools across the country is understandable,” Sununu said.

And denouncing Washington has become part of his regular schtick during the governor’s weekly COVID-19 press conferences.

The question has never been whether Sununu could mount a serious challenge to Hassan — he’d likely enter the race as the nominal frontrunner — but whether he wants to go to D.C. at all. Most political types can’t imagine walking away from an opportunity to go to the Senate, but Sununu’s reluctance appears real. It’s based in part on his preference for being an executive rather than a legislator, but also on his experience living in D.C. while his father, former Gov. John H. Sununu, served in the George H. W. Bush White House.

In 2016, Sununu told NHPR his time living there as a teenager taught him, “I don’t want to go back to Washington. I have no interest in ever going back as a senator or congressman or anything like that because they do it very differently down there. And it really made me appreciate the value of our system here in New Hampshire,” Sununu said.

But that was during his first run for governor, a very different position from his standing today as a popular three-term incumbent heading into what’s shaping up to be a good year for the GOP. And, Republicans strategists note, the landscape for Sununu is even better than it appears at first glance.

To start with, he doesn’t have a “Trump” problem. Sununu didn’t overtly embrace or dismiss the former president, thereby avoiding ill will from everyone other than the most strident of voters.

“He’s a very attractive candidate who’s proven he can win independent voters,” D.C.-based political consultant Brian Jones told InsideSources. “And he’s managed to hit the right balance on COVID between safety and the economy, something other governors have struggled with. Not to mention he’s got a proven family name.”

The NRSC wouldn’t comment on the committee’s efforts to woo Sununu, but told InsideSources why they think Hassan is vulnerable.

“Despite her claims otherwise, Maggie Hassan has positioned herself to the left of the voters in New Hampshire; voting with Bernie Sanders 97 percent of the time and Chuck Schumer 98 percent of the time,” said NRSC spokesman T.W. Arigghi. “It’s clear to anyone who’s paying attention that Maggie Hassan is the most vulnerable Democrat incumbent in the country.”

Sununu also has some advantages that come not from his personal political skills, but from being in the right place at the right time.

“Unlike some other Republicans, he’s not going to face a serious primary opponent who’ll force Sununu to use up resources while pushing him to the right,” Jones explained. “Meanwhile, Hassan’s party is already pushing her to the left. And that’s only going to get worse. She’s already the most vulnerable Democratic incumbent and thanks to conditions on the ground, he’s one of the strongest challengers.

“A lot can change, but right now, the fundamentals of this race shape up nicely for Chris Sununu,” Jones said.