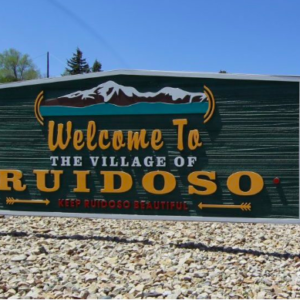 In 2006, The New York Times called it the “New Mexico many imagine” — an “outdoors lovers’ destination, with skiing at Ski Apache, golfing year-round, hiking in the Lincoln National Forest, mountain biking and fishing.” Ruidoso, the newspaper’s Steven Talbot wrote, was “a vacation retreat … especially for Texans.” Much of the western portion of the Lone Star State is less than a day’s drive from the Land of Enchantment’s heavenliest spot. No wonder that a decade later, The Odessa American called the Sierra Blanca an “occasional necessity” for “throngs of area residents.”

The influence of Texans has long made Ruidoso a bit of an anomaly in a state where culture is shaped more by the bureaucrats, legislative careerists, artists, and New Agers of Santa Fe and Taos. When New Mexico’s local right-to-work movement got rolling a few years ago, the village was the sole municipal entity to enact a labor-freedom ordinance. Ruidoso has the only non-Albuquerque location of Buffett’s Candies — founded by a member of the famous family who did not, to put it mildly, share his cousin’s affection for Big Government.

But if the draft of the update to Ruidoso’s “comprehensive plan” is any guide, the ninnies of New Mexico’s Nanny State have opened a new front. At 216 pages, the document quintuples the size of the 2010 version. And it contains the grandiose “visioning” — complete with “framework and priorities” and an “Implementation Matrix” — one would expect from land-use busybodies in the state’s major metro areas.

The Congressional Research Service reports that “[f]ederal law requires state and local governments to designate a metropolitan planning organization … in each urbanized area with a population of 50,000 or more to help plan surface transportation infrastructure and services.” But with not many communities meeting that threshold in the Land of Enchantment, legislators acted on their own. No matter the size, villages, towns, cities, and counties, the New Mexico Department of Finance and Administration explains, “are encouraged by state law to complete a comprehensive plan to address issues such as land use, water, transportation, economic development, and infrastructure.” Ruidoso’s dutifully detailed draft outlines its purpose as assessing “where Ruidoso is today” and documenting “what residents and community leaders in the Village want for the future.”

But while “community leaders” were surely involved, how engaged were Joe Sixpack and Jane Diet Coke in the planning process? “Hundreds of Ruidoso residents participated in meetings and surveys over the last year to share ideas and vision,” the village’s government claims. Yet the U.S. Census Bureau’s estimate for Ruidoso’s 2018 population was 7,848. Think a strong majority of those folks agree that taxpayers should fund “fixed-route [transit] service,” “paid parking … at busy areas,” is worth considering (along with “a possible parking garage in Midtown on Rio Ruidoso”), and a “Traffic Calming Guide” is needed, to “identify the techniques that may be applied on Village roadways and the types of locations where those techniques are most appropriate”?

Widespread public support or not, regardless of how much money and how many “experts” are thrown at the village’s “problems,” is it even possible to anticipate — and make adjustments for — how Ruidoso’s residents will live, work, and move around in decades to come?

In a 2008 study for the Cato Institute, Randal O’Toole expressed withering skepticism of the folks who play SimCity for real: “Government planners can’t accurately predict what future generations will want or need, yet long-range transportation plans can lock agencies into plans and projects that make no sense. Twenty years ago no one predicted that the Internet would lead telecommuters to outnumber transit riders in the vast majority of urban areas, or that intercity bus service (driven by online ticket sales) would be growing for the first time in decades, or that FedEx, UPS, and DHL would be making daily deliveries of online purchases on almost every residential street in America. Just as plans written 20 years ago would be wrong about those things today, plans written today for 20 years from now will also be wrong.”

Whether it’s tiny Ruidoso or capacious Albuquerque, “planning” — at least, the ludicrously precise, wildly aspirational, long-term kind currently trendy — should be scrapped. Elected and unelected “public servants,” and the consultants they enrich with public dollars, ought to know their limitations. All too frequently, social engineering enjoys neither the approval of the people it allegedly benefits nor the humility to acknowledge the things it does not, and cannot, know.