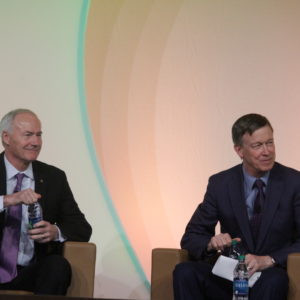 Colorado Governor John Hickenlooper, a Democrat, and Arkansas Governor Asa Hutchinson, a Republican, were guest panelists at the Future Ready Iowa Summit in Des Moines this week to discuss the importance of learning computer science skills in elementary school, secondary school, and beyond. Together, with Iowa Republican Governor Kim Reynolds, the panel discussed the importance of students and adults in the workplace being well versed in coding and familiar with software interfaces in the digital economy.

While personally invited by Reynolds to be a part of the panel, a visit to Iowa two years out from a presidential election usually comes with whispers and rumors that an elected official is canvassing the electorate in the nation’s first-in-the-nation caucus for a possible run at the country’s top office.

“I sought you out because you are leaders in your state,” Reynolds told the panel. “In Iowa, we’re a little competitive so I let [the governors] know we’re going to come at them with everything we have.”

The panel paid close attention to Hutchinson’s initiative in Arkansas which implemented K-8 training in computer science skills as well as set a target to have 20 percent of the state’s high school students complete one credit in computer science courses by 2020.

“We’ve had some success in setting up the infrastructure [for that] because I campaigned saying ‘we’re going to have computer coding in every high school,'” Hutchinson said. “It’s probably the first time it was ever used in a commercial. We made it a little bit easy. We made sure it wasn’t a burden.”

The panel also highlighted all the states’ commitments to establishing apprenticeships for students to help them discover their passion and get a valued education in skills that they’ll use in the careers they’ve built through high school programs.

Hutchinson comes to Iowa with the resume of a political veteran who could lead a successful presidential campaign. He was a former U.S. Attorney for the Western District of Arkansas under Ronald Reagan, former chair of the Arkansas Republican Party, former administrator of the Drug Enforcement Agency and Undersecretary for Border and Transportation Security under George W. Bush, and is in his first term as governor.

In the press, while supportive of President Trump, Hutchinson has not wholeheartedly agreed with his rhetoric or stances on several issues.

Hickenlooper’s intended visit sparked some social media fun with Ohio Governor John Kasich, who just so happens to be visiting New Hampshire this evening to deliver an address as part of the New England College’s President’s Speaker Series. The two exchanged jabs like “no one visits Iowa for no reason,” and “what are you up to in New Hampshire,” on Twitter.

Hickenlooper and Kasich have experience working together, spearheading a bipartisan initiative last year to stabilize Obamacare’s insurance marketplaces. Would they likely put together a campaign to challenge President Donald Trump in a 2020 election? They haven’t denied it. Kasich himself is quoted as saying that the country might be heading towards a multiparty system. In a visit in late March, Weekly Standard co-founder and conservative pundit Bill Kristol said the same thing.

Hickenlooper previously served as Mayor of Denver and as the former chair of the National Governors Association. He is currently in his second term as governor.