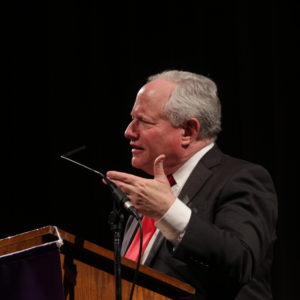 After prefacing his visit with the message to expect the unexpected in American politics in 2018, 2020, and beyond, Weekly Standard co-founder and conservative pundit Bill Kristol advocated for a different kind of political change to a sold-out audience at Cornell College in Mt. Vernon, Iowa this week. Kristol argued that amid a divided voting bloc, cultural feuds, and political infighting that a lack of respect, acknowledgement, and acceptance of the country’s status quo has led to tumultuous political times.

While cautioning the audience to indeed not expect politics to bounce back in line or to return to standards of normalcy experienced before 2016, Kristol’s broader message was that the country’s masses have forgotten the successes and disregarded the normalcies of previous administrations over the last 50 years that resulted in numerous, world-wide achievements prior to 2016, and that America is in need of a return to those times.

“There were a lot of mistakes made (in the world) with us at the center trying to create and preserve political alliances,” Kristol said of modern policy and globalization. “I think one of the problems of the last few years is no one defends the status quo. No one has the nerve to say, ‘wait a second, look at what the world looks like in 2016.’ Think of the last 30 to 70 year period. It wasn’t such a bad time in 2016 as people thought it was.”

Kristol, a proclaimed #NeverTrump-er cited Trump himself as someone who failed to see the successes of American institutions over the last 40 years of “establishment” administrations, and “shrewdly” tapped into a emotionally-primed electorate who were under the impression that those achievements hadn’t been made, or had occurred too quickly for their comfort. In an effort to gain votes, Trump made false promises to these voters, who now make up a large part of Trump’s base, and are a source of his high popularity numbers.

While his message was Burkean in nature, calling for a return to a conservatism that respects American institutions, Kristol assured the audience that he was not making a “rah rah rah” speech for conservatism. He called his talk at Cornell a “political scientist’s” look at Trump, examining the impacts of the administration on the reputation of American politics.

Some have speculated whether Kristol may wish to challenge Trump for the Republican nomination in 2020. Visits to New Hampshire and Iowa leading up to midterm elections are usually a telltale sign of someone with presidential aspirations. Kristol specifically noted that Cornell had invited him to give his lecture.

But Kristol was also recently scheduled to speak at the “Politics and Eggs” forum hosted by St. Anselm College’s Institute of Politics in New Hampshire. That forum has become a mandatory stop on the presidential campaign speaking circuit. While Krisol’s visit was postponed by a Nor’easter earlier in March, likely-candidate Sen. Jeff Flake appeared at the event just two days later.

Kristol also discussed a policy study he conducted with Bill Galston, who was deputy assistant for domestic policy in Bill Clinton’s White House. That study, called “The New Center,” examined issues that both Republicans and Democrats could support, and considered the possibility of a centrist agenda. Kristol stated in his lecture that 2020 could be the year that an independent candidate, campaigning on a balanced platform, may appeal to both parties and result in a success not seen before in American politics.

Kristol made his point stating that even though the American political system appears to have been commandeered by radicals from both the right and left, Donald Trump and Bernie Sanders only won 45 percent of the vote in their respective primaries, leaving plenty of room for centrists to make an impact.

Still, Kristol expressed that this infighting within the parties represents a desire to rebuke the politics of the prior 40 years that led to great accomplishments for the United States. Upon reflection, he said this upheaval can be traced back to the quick rise of Barack Obama against the establishment candidate, Hillary Clinton, in the 2008 Democratic Primary. Obama’s insurgency in the party to take on the Clinton name was bold, and his message called for course correction on the establishment. The results of Obama’s presidency don’t show a clear directional change from the establishment politics he ran against, and so perhaps, the anti-establishment was left wanting much more.

Kristol attributed the animosity towards the establishment and the status quo as an anxiety towards change in the American economy and the impacts of globalization on culture, job and wage growth, and social mobility. However, while he said Trump was “shrewd” and “clever” to pick up and poke that anxiety, Trump has not put forth policies that will quell that anxiety or address it, adding that people “will believe in false solutions when there are no solutions provided” (referencing the Democratic Party’s lack of solutions to addressing the anxiety). While Kristol admitted that in 2009 and 2015 he called for the Republican Party to reform itself to be palatable to minority groups and a younger demographic, he said that perhaps overall change in the nation had occurred at a rate that people weren’t prepared for. However, to completely discount the achievements of administrations past because of slow economic growth, lack of social mobility, and cultural change wasn’t a valid thought process either. Kristol said that the world has experienced fewer wars, the spread of democracy, and expanding economies in places that were riddled with poverty over the last decade, not to mention growths in cultural differences between gender and race.

So while calling for a return to the status quo is a unifying message for Kristol, what’s his solution for anxiety? Education.

Kristol said that voters “shouldn’t be too nostalgic” for earlier American times of coal mining and assembly line working, calling the professions, “dangerous” and “alienating” from society. In the changing economy, access to education is the solution that can allow Americans to transcend their predicament, no matter their age.

Kristol warned that in 2020, whether or not Trump receives the nomination, politics will still be different. There’s the possibility that the Democrats become more radical in their choice of candidates and philosophies. And if Trump is the Republican nominee, he will most likely double down on his campaign promises, which could leave many Americans looking for someone else. Perhaps a centrist candidate by the name of Kristol?