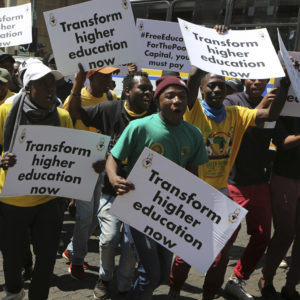 Students and supporters shout slogans, as they march in opposition of rising tuition in downtown Johannesburg on Friday, Oct. 14, 2016. Countries around the world are contending with dissatisfaction among young people over rising higher education costs. (AP Photo/Denis Farrell)
News

The U.S. Is Not the Only Country With a Higher Education Cost Problem

While their numbers do not pop off the page in the same way that the $1 trillion-plus in U.S. student debt does, a similar concoction of rising educational loan volumes and stagnant wages has student advocacy groups in Canada calling for reform. Outside of North America, mass demonstrations over higher education costs have descended into violence at times. In most of the affected countries, the high cost of a college degree has become a major political issue on the left—capable of galvanizing throngs of young people worried about their future.

According to a policy brief issued by the Canadian Federation of Students, the country’s largest student group, the amount of revenue pulled in every year by post-secondary education institutions north of the border has tripled in the past sixteen years. The report argues that rising costs and diminished central government support is shifting the burden of paying for education from the state to students.

As of 2012, total student debt in Canada was at $28 billion, a far cry from the hundreds of billions that the American federal government has on its books in outstanding student loans. While Canada only has a tenth of the U.S.’s population, accumulating interest and rising default rates on their loans has progressive groups calling for a return to heavily subsidized or free higher education.

Similarly, liberals in the U.S., including Sen. Bernie Sanders, I-Vt., and former Democratic presidential nominee Hillary Clinton, have called for free or nearly-free public college. A key difference between the countries is that Canada’s political system has historically skewed to the left, closer to semi-socialized Western European models. According to statistics cited in the report, Canada’s government paid for more than 80 percent of higher education costs in 1982, but in 2012 that figure shrunk to under 60 percent.

The student advocacy organization argues that a rising wave of “neoliberal,” or free market policies, has hamstrung the Canadian government’s commitment to equity. As in the U.S., overall household debt and financial insecurity has grown in the country, particularly for lower and middle class earners. The group framed the rising cost of securing an education as a driver of the same type of income inequality that has fueled domestic populist progressive movements in the U.S., like Occupy Wall Street and a stronger-than-expected presidential bid from Sanders, a democratic socialist.

Another key difference between the two countries is that a larger percentage of outstanding Canadian student loans are issued by private banks than in the U.S. Under the Obama administration, the federal education department took over the student loan process, which has led to reports that the government is issuing loans too freely to people who have no hope of repaying them. The Canadian system poses the opposite problem of lacking consumer protections, according to the report. The progressive group complained that too many students are being forced to rack up interest while they are still in school; resulting in higher loan balances by the time they graduate. In the U.S.’s complex system, some federal loans are interest-free until graduation, while others are interest-controlled—depending on a student’s economic background.

Elsewhere, tensions over rising tuition fees have led to widespread demonstrations and even violent confrontations. In South Africa, the “fees must fall” movement has resulted in clashes and hundreds of arrests between students and police. Students in that country argue that yearly tuition fees—which are still only a fraction of what American students spend—are hampering social mobility among the historically oppressed black communities that make up the majority of South Africa’s population.

In the United Kingdom in 2010, mass demonstrations erupted in London and other areas over proposed tuition hikes. Like the protests in South Africa, the young demonstrators created considerable property damage during their protests. Much of the anger was aimed at the country’s conservative politicians.

In theory, calls from the American right-wing for higher education deregulation and the return of private capital into the student loan market could result in lower default rates and lower tuition costs as schools compete for students and private banks become more discerning in who they award loans to. On the other hand, any proposal that fails to increase accessibility (and by extension social mobility) for students from low-income backgrounds is probably politically unrealistic. There is a lack of readily available solutions—including the proposed private capital reform—that would simultaneously increase higher education accessibility without also increasing government spending.

Until higher education costs are brought under control internationally, the trends associated with the status quo are likely to continue to fuel progressive energy for state intervention-oriented reforms.