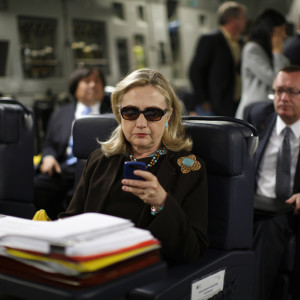 MSNBC may be liberals’ favorite cable news channel, but a longtime senior aide to Democratic presidential frontrunner Hillary Clinton called the network “heinous” in an email to the then-secretary of State back in 2012.

Philippe Reines wrote Clinton on Sept. 6, seeking approval of a photo he planned to release to the media. (Based on his description, it appears to be this image of the secretary sitting in front of a computer and watching her husband, former President Bill Clinton, address the Democratic National Convention the night before.) Reines explained that the State Department had scrubbed a network television logo from the shot to avoid being seen as endorsing a specific channel — or discouraging its competitor stations from running the photo. However, he also added another more personal reason for omitting the graphic: “it’s the heinous MSNBC and I just can’t bring myself to give them that satisfaction.”

It’s not entirely surprising that a Clinton aide would dislike the progressive network. During the 2008 presidential election, MSNBC received criticism for its coverage of the then-New York senator during her primary fight with then-Illinois Sen. Barack Obama. There were charges of sexism and many suggestions that the channel’s coverage favored Obama.