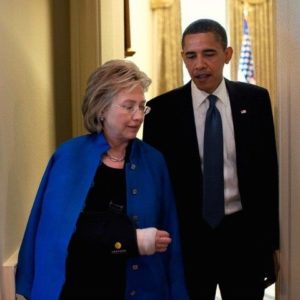 Emails hacked from Hillary Clinton campaign chairman John Podesta and released by Wikileaks this week show the Democratic nominee had mixed feelings about net neutrality weeks before the Federal Communications Commission voted on the topic, and was reluctant to take a public stance despite urgings from her staff.

Last Valentine’s Day Tom Freedman — a former senior advisor to then-President Bill Clinton and a technology advisor during both of President Obama’s election campaigns — emailed Podesta to ask him if Clinton would “say something positive” ahead of the vote in roughly two weeks, adding he had “no doubt” the former secretary of state would support the FCC’s proposal to reclassify internet providers as public utilities.

“The FCC vote on net neutrality is set for Feb. 26, she’ll no doubt support the position of Title II if asked after the vote (I assume),” Freedman, now president of his own consulting firm, wrote in an email to Podesta obtained by WikiLeaks. “[W]ould it make sense to say something positive now including about her commitment to an open and accessible web? Maybe she has said something already I missed…”

Freedman’s consulting firm “works with philanthropies, nonprofits and digital companies” and follows “issues related to building a more open internet” like “net neutrality,” and in a piece for Politico last December listed net neutrality as one of a number of “significant victories” alongside SOPA/PIPA “which sets the rules of the road to keep internet companies from restricting what you can and can’t read.”

In a poll following the FCC’s February vote, Freedman got a majority of respondents — 58 percent — to agree “we need net neutrality rules to protect us from big internet service providers.”

But Clinton wasn’t ready to show public love for the new rules, even after the agency received millions of comments in support, President Obama had called for them months before and when their passage was virtually guaranteed by the FCC’s Democratic majority of commissioners.

After Podesta forwarded the email to Clinton foreign policy advisor Jake Sullivan, the aide said the secretary was “ambivalent” about the issue and unwilling even to tweet her support.

“Thanks guys. We’ve talked to her about tweeting her support and she’s been a bit ambivalent. But I agree – it’s a good issue to be out front on. We’ll revisit,” Sullivan wrote back a day later.

That apparently started a slow move toward Clinton’s final position on the issue. Nine days later during a conference on women in Silicon Valley and two days before the FCC vote, Clinton gave a lukewarm endorsement, saying she would “vote for net neutrality” as she understood it at the time because FCC Chairman Tom Wheeler’s proposal avoided “the worst of the utility regulations,” presumably referring to price regulation.

“I would vote for net neutrality because, as I understand it, it’s Title II with a lot of changes within it in order to avoid the worst of the utility regulations,” she said according to The Hill. “It’s a foot in the door. It’s a value statement.”

Clinton, who had yet to launch her presidential bid, said certain aspects of net neutrality could benefit from congressional input, but implied it would take too long. At the same time, she described Title II as “the only hook they’ve [the FCC] got” to justify net neutrality.

“I think that for the FCC to do what they want to do to try to create net neutrality as the norm, they have to have a hook to hang it on,” Clinton said. “So they’re hanging it on Title II.”

Months later in an October op-ed for Quartz, Clinton made a much more bold endorsement of “strong net neutrality rules,” vowing to uphold them if elected, and even supported another FCC rule later struck down in federal court that would have allowed municipal broadband providers to extend outside their territories and compete with private providers.

“Closing these loopholes and protecting other standards of free and fair competition — like enforcing strong net neutrality rules and preempting state laws that unfairly protect incumbent businesses — will keep more money in consumers’ wallets, enable startups to challenge the status quo, and allow small businesses to thrive,” she wrote.