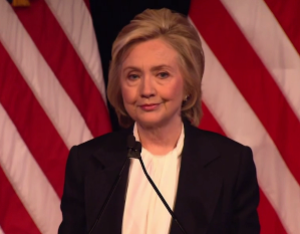 Hillary Clinton: Hardly an Uber Fan of the Sharing Economy

In a major economic policy address at New York City’s New School, Clinton said, “[M]any Americans are making extra money renting out a spare room … or even driving their own car. This on-demand or so-called ‘gig economy’ is creating exciting opportunities and unleashing innovation, but it’s also raising hard questions about workplace protections and what a good job will look like in the future.”

Clinton’s comments came amid a growing debate, particularly among liberals, about how the sharing economy affects workers. Many progressives object to companies like Uber classifying their drivers as independent contractors as opposed to full-time employees. They say this classification allows companies to avoid offering comprehensive benefits and worker protections – a trend Clinton referenced in her speech.

“I’ll crack down on bosses who exploit employees by misclassifying them as contractors,” the former secretary of state said.

That line was encouraging to Amy Traub, a senior policy analyst at the progressive think tank Demos.

“As an economy, as a society, we need to make decisions about the kind of role we want work to play,” she told InsideSources. “To some extent, there’s a question of making our social safety net adapt to a situation where there are different types of employment.”

Traub said she believes many social programs should be redesigned to support Americans regardless of whether they’re full-time workers, independent contractors or — in some case — unemployed citizens. She identified access to childcare, another Clinton priority, as one of the issues that affects a wide range of workers. “Any working parent is going to benefit,” she said.

Sharing economy expert Arun Sundararajan, a professor at New York University, told InsideSources that he agrees the safety net will need to adapt. However, he added that “the idea that you want to stuff everybody into this full-time employee categorization is kind of backwards.”

Furthermore, Sundararajan said he embraces the notion that some Americans may work for several sharing economy companies — for instance, three ride-hailing platforms — at the same time.

Robert Atkinson, president of the Information Technology and Innovation Foundation, was more critical of Clinton following her remarks. He told InsideSources that Clinton’s comments were “a veiled way to begin to regulate the sharing economy in terms of labor practices, which I think would be a mistake.”

Atkinson argued that many sharing economy businesses just don’t make sense as full-time employers, given that flexibility is part of their appeal for workers and customers.

“Are we going to tell Etsy that anyone who sells on the Etsy platform is an employee?” he asked, referencing the peer-to-peer e-commerce website.

“I just think this is one of those issues that a lot of those on the far left have taken up as a cause,” Atkinson said later on. “I think it’s the wrong cause.”

Sundararajan similarly noted that Clinton is attempting to stake out liberal ground and position herself to fight inequality, but the professor argued that many sharing economy companies are actually advancing that goal.

For example, he said the majority of people staying in Airbnb lodging make the median income or less, and Airbnb allows these customers to vacation in places where they probably couldn’t afford a fancy hotel.

“You’re democratizing access to a higher standard of living,” Sundararajan said. “You’re extending the privileges of life to a broader spectrum of the income distribution.”

Sen. Rand Paul of Kentucky tweeted that Americans “shouldn’t take advice on the sharing economy from someone who has been driven around in a limo for 30 years.” He went on to argue that companies like Uber, Airbnb and Lyft stimulate the economy and help lower prices for consumers.