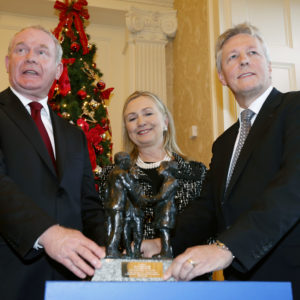 U.S. Secretary of State Hillary Clinton is given an award for her contributions to Northern Ireland by Northern Ireland's First Minister Peter Robinson (R) and Deputy First Minister Martin McGuinness (L) at Stormont Castle in Belfast December 7, 2012. Clinton travelled to Northern Ireland on Friday to lend her support to the British province's fragile peace, the frailty of which was underlined by overnight rioting on the eve of her visit and the seizure of a bomb. REUTERS/Kevin Lamarque
News

President Bill Clinton has called the Northern Ireland peace agreement of 1998 the top foreign policy achievement of his 8 years in the White House. Now, thanks to Britain’s decision to leave the European Union, a future President Hillary Clinton may find herself with the unexpected task of salvaging a great success of her husband and the Irish people.

The deal that ended Northern Ireland’s decades of bloody sectarian violence was predicated on making the border with the Republic of Ireland increasingly meaningless. Instead of barbed wire and watchtowers, the line now hums with a fair amount of commerce, and betrays few signs that anyone is in one country or another.

Since the vote on June 24 to leave the European Union on the strength of promises to crack down on immigration, fears are rising that the Irish peace deal could become a casualty of Britons’ desire for the borders of yore. That may leave a President Hillary Clinton hustling to preserve her husband’s peace in Ireland.

“It is a Clinton success story,” said Jonathan Tonge, a professor of politics at the University of Liverpool who studies the Irish conflict. “Why wouldn’t a Hillary Clinton administration want to protect the legacy?”

Brendan Donnelly, director of the Federal Trust, a British research group, said the effects of Brexit don’t point toward a return of violence. But since Ireland won its independence from the U.K. in 1922, blood has been shed for a blend of reasons.

“Violence has come and gone, and it’s always come in response to a mixture of economic, political and cultural factors,” Donnelly said. “It’s wrong to ignore the threat. It’s not coming tomorrow, but it’s not impossible.”

Britain’s decision to leave the EU came on the heels of warnings from many political leaders that a go-it-alone approach would threaten all sorts of relationships the country has, and one of them is with Northern Ireland. An agreement predicated on a slow dissolution of existing national boundaries ran counter to abandoning the main force for European integration, many of them warned.

Bill Clinton was one of them.

It’s hard to understate the extent to which the Good Friday Agreement of 1998, as the peace pact is known, is synonymous with the Clinton name.

As president, Bill Clinton received a rapturous welcome in 1995 in Northern Ireland, and eventually won the confidence of all parties to the conflict despite some danger to his own domestic political standing. At one point, former Secretary of State James Baker jeered that Clinton was on “Gullible’s Travels,” for dealing directly with Sinn Fein, the political wing of the Irish Republican Army.

But in the end, all parties to the conflict trusted Clinton, who promised that the United States, brimming with confidence after the end of the Cold War, would underwrite a sustained effort toward peace.

“If you walk down this path continually, you will not walk alone,” Clinton said in a now-famous speech in Belfast in 1995. “We are entering an era of possibility unparalleled in all of human history. If you enter that era determined to build a new age of peace, the United States of America will proudly stand with you.”

Bill Clinton, recognizing the centrality of the EU to the agreement, warned of the consequences earlier this year, before the referendum.

“It’s Northern Ireland that will really get whacked if Britain withdrew from the European Union,” Clinton said in March. “And I hope they don’t because it’s too easy to believe that the only solution to the problems in the world is to hunker down.”

Europe Part of the Deal

George Mitchell, the former Democratic senator from Maine who was the chief mediator to the Good Friday Agreement, also warned against leaving the EU before the British voted. Peace is a process, not a goal that’s already been reached, he said.

“The agreement did not in and of itself guarantee peace, political stability or reconciliation,” Mitchell said. “It made them possible.”

In the end, Northern Ireland voted against Brexit, as the British departure from the EU has become known, as did its neighbor across the Irish Sea, Scotland. But England, the dominant population center of the United Kingdom, voted decisively to leave. So now everyone on the island of Ireland — and possibly Hillary Clinton — will have to live with the consequences.

Jackie Redpath, chief executive of the Greater Shankill Partnership, which is devoted to revitalizing one of Belfast’s rougher neighborhoods, said Clintons’ touch — both of them — will be essential in the coming years.

“He’s needed back here because there are things he can say about what’s going on on the streets at the minute here that people just might listen to,” Redpath told the website IrishCentral in 2013. “I think his future involvement and that of Hillary Clinton is not only likely but is required.”

The Good Friday Agreement reconciled two historic demands, one from Irish nationalists, to unite the island’s northern provinces with the Republic of Ireland, and the other from unionists who wanted to preserve the north’s place in the United Kingdom. Both countries’ membership in the European Union was intrinsic to the deal, which diluted the principle of absolute national sovereignty by allowing both Ireland and the U.K. to both contribute to Northern Ireland’s governance and well-being.

A New Border in Ireland

Two themes permeate the deal. Irish nationalists gave up the dream of unity unless the majority of people in Northern Ireland agree to it. Northern Ireland’s unionists, a majority on that part of the island, agreed to let the Irish government have a role in issues affecting the whole island, in particular the border region.

Money from the European Union budget devoted to economic development poured into Northern Ireland, and in the 2014-2020 period, $3.4 billion was expected. Farmers there also benefited from the agricultural subsidies doled out from Brussels, the EU capital.

But U.K. voters — mostly English — opted to leave the EU over worries that the country had become an unwelcome destination for too many immigrants. EU laws permit citizens from any of its 28 countries to travel and work anywhere else in the union.

That has left people wondering what it will be like to traverse the border that separates the 6 northeastern counties that are Northern Ireland from the rest of the island. That will be, with the British departure, the only land border between the United Kingdom and the EU.

For the moment, British politics are in flux, but the advocates of leaving the EU leaned heavily on the immigration issue during the campaign.

“The idea that you have a border there will be offensive to Irish nationalists,” Tonge, the Liverpool professor, said. “The UK is now serious about controlling immigration, and anyone can cross the Irish border. If the UK wants to control immigration, it has to control that border.”

The bigger hit to Northern Ireland may come through business.

The region has clawed its way to a better standard of living since the Good Friday Agreement in part because of greater economic integration with Ireland, something that a new border threatens. For example, Northern Irish ranchers who raise cattle, sheep and lamb frequently ship their animals south for slaughter.

Mitchell Reiss, who was the U.S. special envoy to Northern Ireland in the Bush administration said the coming downturn in the U.K. overall will certainly “find its way to Northern Ireland” over the next 5 to 10 years as Britain leaves the EU. Young Irish proved to be big advocates of the EU, and may simply vote with their feet.

“I can see that there will be a brain drain,” Reiss said.

During the 2008 campaign, Hillary Clinton harvested considerable criticism for taking partial ownership of the agreement, saying she “helped bring peace” to the troubled region. That may have been an exaggeration, but as secretary of state, she stayed involved, and later won an award for her work.

Clinton made her final overseas trip to Ireland, in 2012. If Britain’s decision to leave the EU threatens the peace deal, she may soon find herself visiting as president.