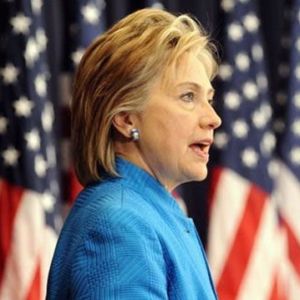 While Hillary Clinton’s recent attacks on Bernie Sanders grabbed the headlines, the Democrats’ 2016 presidential nominee also directed her ire at the Republican Party, claiming it plans to “steal votes” in the upcoming election.

States like Georgia and Wisconsin are struggling with the issue of outdated voter rolls, overloaded with obsolete records and deceased voters still eligible to vote. Democrats denounce efforts to clean up these rolls as “voter purges” that they say are actually designed to deny citizens their right to vote.

In the same Hollywood Reporter interview in which she claimed “nobody likes Bernie Sanders,” Clinton claimed that “Republicans and their allies” are trying to make it harder for voters to participate in the 2020 election. “That means you’ve got to deal with voter suppression, because they’ll steal votes or they’ll prevent votes from happening,” Clinton said.

“They’re now trying to purge voters so that they can try to limit the electorate,” she said, adding that she believes voter suppression was one reason she lost to Donald Trump.

According to a federal lawsuit filed late last year, the city of Detroit has 106 registered voters for every 100 adult U.S. citizens in the city. Thousands of people are registered multiple times under their same names and more than 2,500 registered Motor City voters are actually dead.

As a result, some states are attempting to clean up their voter rolls and make them current, an effort some Democrats and progressive activists oppose.

In Wisconsin, an appeals court on Jan. 14 put on hold an order to immediately remove up to 209,000 names from the state’s voter registration rolls, handing Democrats — who had fought the move — a victory in a state Trump carried by just 23,000 votes in 2016. The appeals court sided with the bipartisan state elections commission, which decided not to remove any voters while the court fight continues.

Wisconsin’s presidential primary is April 7 and the issue is unlikely to be resolved in court before the presidential election.

The conservative law firm that brought the case — the Wisconsin Institute for Law and Liberty — wanted the purge to happen before the election. However, the elections commission raised alarms over the accuracy of data used to identify voters who would have their registrations disabled.

In Georgia, a federal judge allowed state officials to purge voter rolls of about 300,000 records of people who have either died, moved out of state or haven’t participated in an election since 2012. Opponents said that more than 120,000 people should have been left on the rolls, especially in a heavily contested presidential election year.

In addition, Americans are highly concerned about how secure the 2020 election will be, according to a recent NPR/PBS NewsHour/Marist Poll. The poll found that 41 percent of responders believe the U.S. is not very prepared — or not at all prepared — to keep November’s election safe and secure.

Two-thirds of Democrats think the country isn’t prepared, while 85 percent of Republicans believe it is.

“Like so many issues, Americans view election security from opposite poles of the partisan divide,” said Lee Miringoff, director of the Marist College Institute for Public Opinion, which conducted the poll.

Meanwhile, in early December, the U.S. House passed a bill aimed at restoring a provision of the Voting Rights Act that would require certain states to receive clearance from the Department of Justice or the U.S. District Court for the District of Columbia before making any changes to voting practices.

The bill, which passed along mostly partisan lines 228-187, includes language that regulates which states and political subdivisions have to seek federal approval when updating voter rolls or making decisions related to voting practices.

Critics of the bill called it an infringement on state rights. The measure is unlikely to pass in the Republican-controlled Senate.