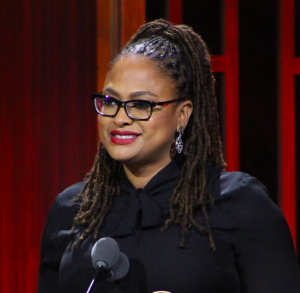 Ava DuVernay recently swooped into the nation’s capital, sort of like a dreadlocked version of Paul Revere, figuratively speaking, of course. She dashed to Washington to receive a lofty honor and spread a pivotal message — make that two of them.

But this wasn’t a legendary warning about an impending British invasion, a la Revere. The determined DuVernay sounded a reverberating alarm as she explored two interconnected themes: the importance of recognizing grass-roots game-changers and the significance of storytelling by people of color.

All the while accepting a Free Expression Award from the Newseum. DuVernay, an acclaimed movie director, was among five sets of honorees, including anchor Judy Woodruff of PBS, who were recognized as “champions of a free press and free expression in a tumultuous time for the media and First Amendment.”

While Paul Revere raced on horseback in 1775, DuVernay took to the air en route to delivering her words of wisdom, arriving about the midpoint of the show. As she said, “I’m fresh off the plane from Los Angeles and right back afterward.”

DuVernay dedicated her award to someone that most in the 400-member audience at the pricey awards dinner probably couldn’t identify with, that being slain rapper Nipsey Hussle, murdered March 31. DuVernay told us: “He’s someone who was and is important, and who used his art in dynamic ways. He’s a rap artist, an entrepreneurial activist from the part of the country that I’m from, very close to Compton, where I grew up. He told the truth through his art.”

That was Part I of DuVernay’s speech.

Hussle’s real name was Ermias Joseph Asghedom, the son of an East Africa Eritrean immigrant father. In some ways, he was a contradiction, a complicated figure: Hussle spoke publicly about his gang affiliations, but he also expressed anti-violence themes in his music and messages. Los Angeles Mayor Eric Garcetti and L.A. Police Department Chief Michel Moore had praised Hussle’s efforts to help mitigate gang violence, according to CNN.

Hussle employed neighborhood folk in his barbershop/clothing store businesses and initiated a “Too Big to Fail” program to help local youth engage in STEM studies.

DuVernay received international recognition in 2015 for being the first black woman to direct a movie, “Selma,” that later was nominated for an Academy Award for Best Picture.

She also was the showrunner for the popular television series “Queen Sugar,” which airs on the Oprah Winfrey Network. And she produced a four-part series about the polarizing Central Park Five case titled “When They See Us,” a searing docudrama set to debut on May 31 on Netflix.

While “Selma,” a film about the 1960s civil rights movement, made DuVernay a household name, she did her best to make diversity in the press a household issue on this night. That’s Part II of her speech.

DuVernay singled out the Los Angeles Times, praising the publication and its culture writer, Gerrick D. Kennedy, a black male, by name “for profiling the TOTALITY of Nipsey’s talent and intention with great insight, understanding and sensitivity.”

Kennedy’s story appeared on a section front, with the headline, “A Legend in His City.”

In describing the Times’ presentation, she said: “I gasped when I saw it. The layout, the words, the way that they had honored him on the page.”

DuVernay’s message about the L.A. Times and Kennedy is one of the positive, heartwarming stories in today’s media industry, especially regarding newspapers. But lately, we have seen major hemorrhaging in the industry, both overall and concerning folk of color.

“The decrease in journalists of color has had a profound effect on news coverage in at least two major areas: the loss of institutional memory and the decline in government news affecting people of color,” said media columnist Richard Prince, who writes “Journal-isms,” an online newsletter that focuses on people of color in the press.

“When cuts are made, it is usually those with the most longevity who are offered buyouts. When these are people of color, institutional knowledge of communities of color suffers.”

DuVernay buttressed that assertion during her speech, as she also lauded Nikole Hannah-Jones, a black journalist for the New York Times, for her Tweet explaining “why it’s so critical to hire journalists who are of the cultures that they are writing about,” and praised Hannah Giorgis, an Ethiopian-American writer for The Atlantic magazine, for her coverage of Nipsey Hussle’s connection to the East Africa Eritrean diaspora.

As DuVernay said, “(Giorgis) wrote with a rare and wonderful specificity that sparked a warmth within me and made me feel so many things. That’s a good thing that journalism can do.

Ava DuVernay may have arrived late to the party … but her message was worth the wait.