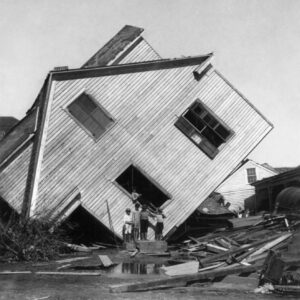 HOLY COW! HISTORY: A Hurricane, a Rabbi, and a New Life in America

Storms should never be taken lightly. Hurricane Ian is a fresh reminder of what we know too well, that nature’s beauty can turn savage when the skies darken and the wind picks up.

One such catastrophic event brought out the worst the elements can inflict on man, followed by the best of man helping his fellow man. All within the same coastal community.

Galveston, Texas was a bustling place in the summer of 1900. A 19th-century boomtown, its mushrooming population pushing 40,000 made it the Lone Star State’s fourth largest city. Snuggled alongside the Gulf of Mexico, it was home to one of America’s leading ports. International trade flourished so much its downtown, known locally as The Strand, was nicknamed “the Wall Street of the Southwest.”

At first, it promised to be just another storm. The city had seen—and survived—its share of them over the years. But it quickly became apparent this one was much more than a typical storm.

The hurricane that made landfall at Galveston around 8 p.m. on Sept. 8, 1900, didn’t have a name; the National Hurricane Center wouldn’t start identifying them that way for another 50 years. But it didn’t need one. Because when it was over, the Galveston Hurricane had notched its place in the record books as the worst national disaster in U.S. history.

We’ll never know how many people died that Saturday night. Historians generally place the death toll at 8,000, with some estimates going as high as 12,000. The city was flooded by up to 12 feet of water. Some 7,000 buildings were destroyed, more than half of them homes.

The tragedy was enough to drive some surviving businesses to nearby Houston. Others hung on, determined to somehow claw their way back to normalcy.

And amid all the wreckage and ruin and waterlogged streets, an energetic rabbi saw an incredible opportunity.

Henry Cohen was the 37-year-old rabbi at Galveston’s Congregation B’nai Israel. Part scholar, part community activist, part writer, he was always looking for ways to make things better for others. And he knew Galveston offered a golden chance for Jews looking to start over in this country.

He had caught the vision of Jacob Schiff, himself a Jewish immigrant who had struck it rich in business in New York and wanted to assist Jews coming to the U.S.

It was a particularly tough time to be Jewish in Europe, especially in the Russian Empire, where the czar’s pogroms sent millions of people fleeing for their lives. Many of them wound up in New York City.

But that was the problem. So many Jews were arriving in the Big Apple at the start of the 20th Century, it was feared Washington might impose immigration quotas and severely restrict the number of new arrivals. Schiff wanted to help those people move into the American interior and put down roots there.

And so, the Galveston Movement was born. With the city needing new residents as it was being reborn, Rabbi Cohen and others set about inviting them to their town. Bankrolled by Schiff’s donation of almost $500,000 (nearly $15 million today), volunteers from several Jewish organizations diverted immigrants away from Gotham and sent them to Galveston instead.

Between 1907 and 1914, tens of thousands of Jews passed through the city’s port. Many came from Palestine where they had gone after being driven from their homes in Eastern Europe. Cohen and his allies met them at the docks, helped them navigate the cumbersome entry process, and then steered them to new homes—and new lives—in the recovering city and beyond.

There were moments of friction, of course. Some Texans were bewildered to hear their new neighbors speaking Russian, Polish, German, Yiddish, and Hebrew, languages they had never experienced before. Some simply couldn’t understand why the immigrants refused to work on Saturdays. And as the new arrivals went into business for themselves and began prospering, some merchants grew jealous. But there were more success stories than failures.

The Galveston Movement gradually sputtered out of existence as World War I neared, slowing the tide of Eastern European immigration. Henry Cohen was a respected rabbi emeritus when he passed away at age 89 in 1952. Miles deep in the heart of Texas, mom-and-pop businesses still operate on small-town courthouse squares that were founded by people he helped settle there.

Yes, a hurricane can be ferociously ugly. But what came come out of it can be beautiful.

HOLY COW! HISTORY: A Hurricane, a Rabbi, and a New… Read More