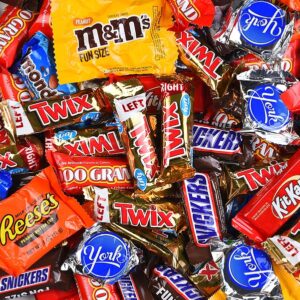 In the aftermath of big elections in Virginia and New Jersey, pundits say a Red Wave may be replacing a Blue Wave. But one thing is certain: America’s children are riding a Sugar Wave as they finish the last of Halloween’s trick-or-treat candy.

Which poses an interesting question: How well do you know the stories behind the names of America’s beloved candy bars?

We begin with the Kit Kat bar. One day in the 1930s, a worker at a large confectionary plant in York, England slipped a recommendation into a suggestion box for a small candy bar that a working man easily could carry in his lunchbox. Britons quickly fell in love with the crunchy taste when Rowntree’s Chocolate Crisp debuted in 1935. But they were less enthusiastic about its clunky name.

Reaching into English history, when a mutton pie called a Kit Kat was served at 18th-century meetings of the political Kit-Cat Club in London, the name was resurrected. The new title played equally well when it was introduced on this side of the Atlantic after World War II.

Think the gooey goodness of the Milky War candy bar was inspired by our galaxy? Think again.

When Mars Candy rolled it out in the early 1920s, it borrowed the name of a milkshake that was popular at the time. Americans didn’t mind that bit of plagiarism because when Milky Way went national in 1925, it racked up $800,000 in sales, or about $12.5 million today. Not bad when you consider they sold for nickel apiece.

Speaking of Mars, who hasn’t at one time or another sunk a sweet tooth into the nougat on peanuts on caramel on milk chocolate sensation of a Snickers bar? A logical guess would be its name originated from snickers that followed an amusing idea. But no. Snickers was actually named for the Mars family’s favorite horse!

Then there’s the widely popular 3 Musketeers Bar. What on earth does Alexander Dumas’ 1844 novel about 17th-century swashbuckling adventurers have to do with fluffy, whipped mousse covered in milk chocolate?

When it debuted in 1932, it was different from the candy bar we know today. The original version had three sections: chocolate, vanilla, and strawberry. Three tastes led to 3 Musketeers. Rationing during World War II forced Mars to drop the vanilla and strawberry pieces. Americans seemed happily content with just the chocolate part because it remained popular after wartime restrictions ended.

What about M&Ms? Americans were devouring the pill-sized sweets long before rapper Marshall Mathers piggybacked on its popularity by calling himself Eminem. The concept was taken from candy eaten by soldiers during the Spanish Civil War of the 1930s. A hard coating kept chocolate from melting in hot climates.

When M&Ms debuted exactly 80 years ago this September, its name was drawn from confectionary royalty. It was created by using the first letter in the last name of Forrest Mars, son of legendary Mars Candy founder Frank Mars, and Hershey Chocolate president William. F.R. Murrie, who owned 20 percent of the product.

Which brings us to the mother of all candy bar names.

When Chicago’s Curtiss Candy Company introduced its combination of peanuts, caramel, and chocolate Kandy Kake in 1920, it experienced what Kit Kat’s makers encountered. Folks loved the taste but hated the name. In 1921 it became Baby Ruth. It just so happened that at that precise moment, a certain New York Yankee named George Herman Ruth was knocking out home runs on his way to becoming a baseball superstar. So, Baby Ruth was named in honor of Babe Ruth, right?

Oh, no, Curtiss claimed with a straight face. The new name was actually a tribute to President Grover Cleveland’s daughter. Born in the White House in 1891, she was nicknamed “Baby Ruth.” Americans at the time were captivated by the child, following her first words, her first steps, and so on.

But believing Americans were motivated to plunk down a nickel for a candy bar named after a girl born 30 years earlier (and who sadly died of diphtheria at age 12) stretched credulity. A more likely explanation is the “Baby Ruth” Cleveland claim was a cover story that kept Curtiss from having to pay royalties to the Sultan of Swat.

By the way, Baby Ruth’s progenitor did some name changing of his own. Otto Schnering originally sold candy under his last name for years. Until World War I, when having a Germanic surname was suddenly bad for business. So, he adopted his mother’s maiden name, and it was the Curtiss Candy Company from then on.

What’s in a name, Shakespeare famously asked? When candy is involved, plenty!