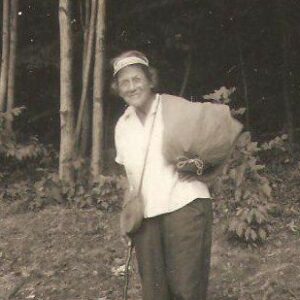 “When the going gets tough, the tough get going,” they say. But fewer had it tougher, or went farther, than Grandma Gatewood.

Emma Gatewood’s life was hard. Born in Ohio in 1887, she was one of 15 kids in a family that slept four to a bed. Her father lost a leg in the Civil War and spent the rest of his life drinking and gambling. Though her formal education ended in the 8th grade, she kept learning by devouring encyclopedias, Greek classics, and books on woods and wildlife.

At age 19 Emma married a 27-year-old teacher and tobacco farmer named P.C. Gatewood. The honeymoon ended quickly when Emma discovered she was expected to work in the fields alongside the men. plus cook, clean, and raise their 11 kids.

P.C. was mean. He killed a man in 1924 but avoided prison because the judge said his many children would go hungry with him behind bars.

He beat Emma often, sometimes almost to the point of death. When he turned violent, she tried to run into nearby woods. Safe in the security of her beloved trees and plants, she found peace and solitude.

P.C. repeatedly threatened to send Emma to a mental institution to keep her from divorcing him. In 1939, he had her jailed in the first step toward having her committed. Seeing Emma’s cracked teeth and broken ribs, their town’s mayor moved her into his home and helped her get a job. She divorced P.C. the next year. A series of odd jobs saw her through the next decade until her children were all grown.

Then, as so often happens, fate unexpectedly called. For Emma, it came in the form of an old magazine. She happened upon a 1949 National Geographic issue featuring an article on the Appalachian Trail. At that moment an incredible idea took root in her mind. She would become the first woman to walk the entire length of the trail, all 2,200 miles from Springer Mountain in Georgia to Maine’s Mount Katahdin.

The idea grew into an obsession. At a time when people nearing 70 were expected to relax in rocking chairs, Emma began preparing to attempt what no woman before had ever done. Her legs were strong, she was in good health, so why not?

She began her journey at Mount Katahdin in July 1954 — and promptly met with one disaster after another. She broke her glasses, got lost, then ran out of food. When rangers found her, they persuaded the hapless sexagenarian to go home.

But while Emma Gatewood may have failed, she didn’t quit. She told no one about her setback and quietly prepared for a second attempt. She learned from her initial mistakes and changed her strategy.

In 1955, she started two months earlier this time and began in Georgia. Again, it wasn’t easy. That 1949 article had made her believe the route was a smooth trail. It wasn’t, and her Keds tennis shoes were no match for the rugged mountain terrain. She expected to find shelters along the way; there weren’t any, forcing her to sleep in piles of leaves.

But she stuck with it and kept walking. Newspapers picked up her story as she went, and soon she acquired a nickname—Grandma Gatewood—along with celebrity status.

She achieved her goal 146 days later when she reached Baxter Peak atop Mount Katahdin. She signed the register, sang “America the Beautiful,” and said to herself out loud, “I did it. I said I’d do it, and I’ve done it.”

Grandma Gatewood then appeared on the Today show, was a guest on a TV game show, and was even profiled in Sports Illustrated where she said, “This is no trail. It’s a nightmare. For some fool reason, they always lead you right up over the biggest rock on top of the highest mountain they can find.”

And she didn’t stop walking. She hiked the entire Appalachian Trail a second time two years later, walked all 2,000 miles of the Oregon Train in 1959, and at age 76 she did the Appalachian Trial yet again (though this time in sections), becoming the first person to walk it three times. She went right on hiking right up until her death in 1973 at 85.

What was the secret to her success? Grandma Gatewood refused to let anything—failure, adversity, or advanced age—stand in her way.