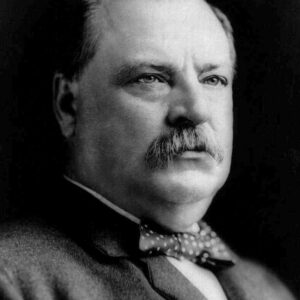 It’s a parenting cliche’: Moms and dads secretly hoping their child will grow up to become the President of the United States. The odds are long; but it never hurts to dream, right?

However, one day back in the spring of 1887, a man who actually had the job made a very strange wish—and he had no idea what Fate had in store for the child he wished it upon.

Grover Cleveland was a lot of things. He was the fattest person ever elected president (until Taft shattered that record 12 years later). He was also the only man to serve two non-consecutive terms, which forever screwed up the presidential numbering system. He was President #22, lost his reelection bid to #23, and then was re-elected four years later. So, was he #22 again or #24? (After much debate, historians eventually decided to call him #22 and #24. Go figure.)

Cleveland was from upstate New York and had a good friend named James.

James lived in the Hudson River Valley and was socially well-connected. He was a wealthy businessman who dabbled in coal and railroads.

In the mid-1880s, he sank a lot of money into a partnership that wanted to build a canal across Panama. (This was 20 years before the U.S. did it.) He needed Washington’s help in persuading Nicaragua (which controlled Panama back then) to allow the group to dig. And that meant lots of lobbying with Congress and the Cleveland administration.

So, James decided to pay an extended visit to DC. He, his wife and their 5-year-old son Frank spent the first six months of 1887 in a rented house on then-fashionable K Street.

In between his wining and dining of congressmen and bureaucrats, James also paid several purely social calls on his buddy Grover in the White House. How good friends were they?

A year earlier, the 49-year-old Cleveland had married Frances Folsom, his 21-year-old hottie ward. The union made a lot of presidential history: Cleveland was the first president to get married while in office; the only president to marry in the White House itself; and Frances became the youngest First Lady in American history. (Jackie Kennedy, who was 31 when she moved into 1600 Pennsylvania Avenue, was second youngest.)

And there, on a prominent White House fireplace mantel, sat the splendid clock James had given the couple as a wedding gift. So, when I say James and Grover were buddies, trust me, they were tight.

Anyway, back to our story.

James’ lengthy stay in Washington was coming to a close when he hit up Cleveland for one small, but very personal favor: He wanted to bring young Frank to the White House to meet the president.

“Sure,” Grover said, “bring him by late tomorrow afternoon.”

James and Frank headed off to the Executive Mansion as scheduled and waited outside the door of Cleveland’s second-floor office. (This was several years before the West Wing and its Oval Office were built.)

It turned out Cleveland was having a particularly stressful day. When he finally emerged from his office, he was visibly weary. James introduced Frank, and they shook hands.

Then Cleveland said something very odd. He patted the child’s head and said, “My little man, I’m making a strange wish for you. May you never grow up to be president of the United States.”

At age five, Frank already had a knack for selectively ignoring what he was told, and he apparently did so this time.

Not only did Cleveland pick the wrong boy for his strange wish; he picked the one who served as president longer than anyone else in history!

How’s that for irony? O. Henry couldn’t have written a better twist ending.