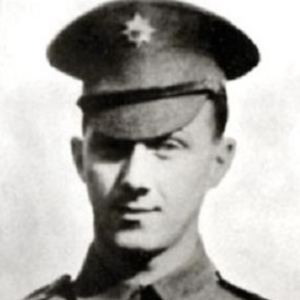 Every so often, history provides a story that is every bit as improbable as it is inspiring. This is one of them.

A badly injured young soldier’s heroism defied the odds—and his enemy helped him receive the recognition he deserved for it. Not any old recognition, either, but the highest honor Great Britain can bestow: the Victoria Cross. It’s their version of the Congressional Medal of Honor.

To fully appreciate just how big this Big Deal is, consider this: Since the VC (as our British cousins call it) was created 154 years ago, it’s only been awarded to 1,355 people. In fact, it’s only been presented to 11 recipients in the 77 years since World War II ended. When military personnel and veterans display ribbons on their uniform, it is always positioned first. The honor is so significant, King George V said, “Even were a VC to be sentenced to be hanged for murder, he should be allowed to wear his VC on the scaffold!”

With the back story established, let us now turn our attention to Edward Colquhorn Charlton.

Born in northern England in 1920, his early life was so unremarkable little is known about it.

Drafted at age 20 in September 1940, he eventually wound up serving in one of Britain’s premier military units, the Irish Guards.  In the closing days of the Second World War, Allied armies were thrusting ever deeper into Hitler’s crumbling Third Reich.

On April 21, Charlton was driving one of four tanks which, along with a platoon of British infantry, had captured the town of Wistedt, not far from Hamburg.

Suddenly, the Nazis launched a surprise counterattack to retake the town. Three British tanks were knocked out by enemy fire. The fourth, Charlton’s tank, developed electrical trouble and couldn’t move. Talk about bad timing; the disabled tank was a sitting duck.

So, Charlton was ordered to climb out of the turret, remove the tank’s Browning Automatic Rifle (BAR), and support the infantry.

But he did more than that.

The Germans badly outnumbered the Brits, who were in serious danger of being surrounded and captured.

Nobody knows what happened inside Edward Charlton’s head and heart at that precise moment. But this much is certain: Without orders, and without saying anything to anyone, he launched a one-man man attack, running straight into a column of Panzer tanks and infantry, firing the BAR from his hip, and inflicting heavy casualties. In minutes, he disappeared from his comrade’s sight.

The Germans saw him. All too clearly. More and more of them kept falling as Charlton plunged into their midst.

A bullet ripped into Charlton’s right arm, shattering it. It didn’t stop him. He mounted the gun on a fence and kept blazing away with his left arm. He was wounded again, and then again. The third injury was so severe he ultimately collapsed from loss of blood. The Germans captured him.

Although now a prisoner, his one-man charge had stopped the enemy in their tracks, allowing the Brits to safely fall back and regroup, sparing them Charlton’s fate.

He died later that day at age 24, just 16 days shy of Germany’s surrender.

Soon afterward, British officers were reading documents handed over by the German Army. Their report on the Battle of Wistedt told of Charlton’s heroics in precise detail. German POWs who witnessed the attack were interviewed. They corroborated the report, with several even insisting the brave enemy soldier deserved a medal.

Thanks to the Germans’ documentation, King George VI eventually presented the Victoria Cross to Charlton’s family. It was the very last VC awarded in the European Theater in World War II.

How do you explain what drives a man to voluntarily go so far above and beyond the call of duty? What makes him keep fighting while he is tortured by pain, knowing he will not survive this, his final battle?

Maybe a spirit whispers in his ear, telling him to look beyond himself.

Whatever the reason, a simple truth is chiseled into the cold stone marker that silently stands above Plot 7, Row F in the British Military Cemetery near Niedersachsen, Germany:

“Greater love hath no man than that he lay down his life for others.”