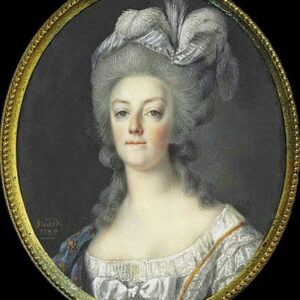 President Joe Biden has proposed another round of COVID-19 stimulus checks, in part because many of his fellow Democrats considered the $600 per person sent out in December insufficient, even puny. Indeed, some political and media figures mocked the money using the phrase “Let them eat cake” – so much so that the words were trending on Twitter in late December.

It’s the signature line of Marie Antionette, queen to France’s King Louis XVI. Both had their heads removed by Madame Guillotine during the French Revolution.

In fact, Marie’s gruesome demise and that inflammatory quote are the only things most Americans know about her today. But did she actually say those notorious words?

Well, sort of. Let me explain.

Marie is remembered as one of history’s greatest spoiled brats. And to a certain extent, she was. The youngest daughter of Austro-Hungarian Empress Marie Theresa, she was pampered and indulged. At age 14 she was married by proxy to the 15-year-old Louis, heir to France’s throne. Marie was packed off to Paris where she met her pudgy new husband for the first time. The teenage couple were apparently quite shy with each other; they took seven years to consummate their marriage. Royal tongues spread the news far and wide, and poor Marie quickly became the laughingstock of her adopted country.

But she had bigger problems than that.

The marriage cemented a new alliance between France and Austria. Many Frenchmen didn’t like Austrians or the treaty their king had made. So young Marie became the people’s scapegoat, a target for their nationalistic scorn.

Not that she gave them much reason to love her. Life at the royal court in Versailles was a case study in self-indulgence. And Marie was among the most self-indulgent of all. She ordered 300 elegant gowns a year, almost one for each day, and rarely wore the same one twice. The food and wines were the finest quality, and there was always more than enough of both. Though intelligent, she was very lazy: Her tutor said she could barely read and write her native German language when she was 13.

Yet despite the outward frivolity, those who knew her well said she was also kindhearted and generous in private.

Louis and his queen ascended to the throne in 1774. He was 20, she was 19. When they did, something interesting happened: They developed a genuine fondness for one other.

The royal couple even managed to spice up things in the boudoir, with Marie eventually having four children and adopting several others. By all accounts, she was a loving, doting mom. The French people even softened toward her—for a while.

Things changed as conditions in France worsened. Taxes were sky-high, people were weary from many years of war, crops failed. There was nothing to eat. Revolution was in the air.

Told people in Paris were starving, the history books say Marie flippantly replied, “Let them eat cake.” It was a cruel and callous comment amid widespread suffering.

But there are several problems with that story.

If you know French cuisine, you know brioche is a bread made with lots of eggs and butter for a light, savory taste. But it’s not even close to being cake.

Also, Rousseau finished writing his book in 1769, the year before Marie ever set foot in France.

Finally, he attributed the comment to “a great princess” without identifying her by name.

The quote was ascribed to Marie in 1843, some 50 years after her death. You can almost picture two book editors having this conversation when the story was printed in English:

“How are we going to translate ‘brioche’ so everyday folks can understand it?”

And so cake it became, and cake it has remained for 178 years. But did Marie Antionette actually say it? Probably not.

This much is certain: The ill-fated queen’s last words were, “Pardon me, sir, I did not mean to do it.” She apologized for stepping on her executioner’s foot just before she was beheaded at age 37.

Marie Antionette may have been a lot of things. But rude, apparently, was not one of them.