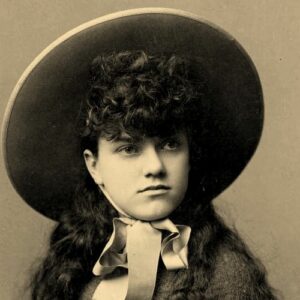 Another Women’s History Month is coming to an end. As we draw the curtain on the 2021 edition, it’s a good time to recall an entertainer who reached the heights of her profession, yet is almost entirely unknown today.

From 1883 to 1913, Buffalo Bill’s Wild West show was America’s favorite live entertainment. With that genre largely forgotten today, it’s no surprise that people also forgot the important role women played in those shows.

Best remembered are Annie Oakley (thanks in no small part to the hit Broadway and movie musicals “Annie Get Your Gun”) and Calamity Jane, a true Old West character whose real-life stories were only surpassed by those she made up. (Such as claiming to have married Wild Bill Hickok and having borne his child; she did neither.)

Lulu Bell Parr was another big star of that era. Almost unheard of today, she was widely popular as the “Champion Lady Bucking Horse Rider of the World.”

Lulu was born in 1876 in the very un-Western town of Fort Wayne, Indiana. Not much is known about her early years. It seems her parents died when she was young. She married at age 20 and was divorced three years later on grounds of “extreme cruelty.”

Somewhere along the way she learned how to ride and shoot. She was a good trick rider and could hit what she aimed at with a gun. But she really excelled at bronco riding. Lulu could handle an unbroken horse as good as any man. So, it was only natural when at age 27 she headed west.

Lulu crossed paths with Pawnee Bill, who was so impressed by her riding skills that he offered her a job in his celebrated show.

In 1908, she joined Colonel Cummins’ Wild West Tour and went to Europe, where she performed before King Edward VII in Liverpool, England.

In 1909 she made it to the top of her profession when she joined Buffalo Bill’s Wild West. Bill was blown away by her equestrian ability and gave her an ivory-handled Colt revolver in admiration.

Lulu returned to Pawnee Bill’s show in 1916. But times were changing. Silent movies had arrived and people were deserting show tents for the cheaper movie theaters.

It was a sad downward slide for Lulu from there. With Wild West shows going out of business, she kept sinking to ever-smaller outfits before finally being forced to hang up her spurs for good in 1929 at age 53.

Flat broke and alone, she moved to Ohio and lived with her brother and his wife. Lulu was a favorite of neighborhood children who loved hearing her stories of famous Western heroes and ogling the collection of colorful costumes she had worn over the years.

Lulu Bell Parr suffered a stroke and eventually passed away in 1955. She was 78.

Almost all that’s left to recall the hundreds of thousands of people she thrilled over the many years with her bronco riding feats is a lonely tombstone in a Dayton, Ohio cemetery inscribed with the many western shows in which she once starred.