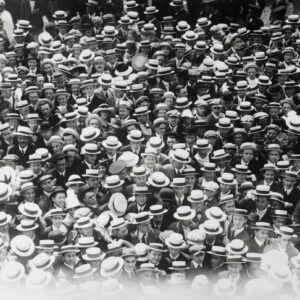 Fashion fads come and go. But rarely do they lead to violence. Rarer still do they trigger a riot.

Yet that’s exactly what happened exactly 99 years ago this month. It’s a tale both hard to believe and almost totally forgotten: This is the story of New York’s Straw Hat Riot.

The early 1900s saw its share of style innovations. For men, one involved a new type of summer headgear. It was a huge no-no for a man to be seen in public with an uncovered head back then. One old-timer said, “Leaving your house without a hat was as bad as going outside naked.”

A significant amount of the body’s heat escapes through the scalp, meaning when the mercury shot up in summertime it was trapped under the brim of a man’s chapeau. In the days before air conditioning, that was the last thing any guy needed.

The straw boater came to the rescue. It was lightweight, letting the dreaded warmth easily escape and so was much cooler for the wearer. Because it was made from straw it was affordable for almost every budget, too. The boater soon became the rage, growing so popular so suddenly many communities had an unofficial Straw Hat Day, a specific date when it was socially acceptable for men to put away their felt hats for the summer and break out the boaters.

There was also another equally unofficial, yet strictly observed, custom: September 15 became Felt Hat Day. That was when men were supposed to switch back to wearing winter hats. A man sporting a boater from that day on was like someone wearing white after Labor Day—a serious faux pas. Men observed that tradition as though it were a religious commandment.

In the early 1920s, a new twist began developing. Adolescent males considered it open season on anyone caught wearing a boater on Felt Hat Day. At first, they would taunt and ridicule the unfortunate fashion violator. That turned into knocking the offending hat off the head with a stick. Things only got worse from there.

In September 1922, boys began roaming New York streets in gangs. For some reason lost to history, the kids went after boaters on September 13 that year, two days ahead of schedule. They started out by stomping straw hats worn by factory workers in the Mulberry Bend neighborhood of lower Manhattan. Then they shifted to the waterfront. But the burly dockworkers fought back, and soon a full-scale brawl was underway. It spilled onto the Manhattan Bridge and brought traffic to a stop.

The police were called, and they eventually restored some measure of order. Until that evening.

Teenage gang members carrying sticks with nails in them went on the hunt for any man sporting a boater. Some 1,000 swarmed Amsterdam Avenue, snatching hats left and right and beating anyone who resisted.

The situation dissolved into chaos. But there were moments of comedy, too. When a youth tried to grab the hat of one Acting Detective Brundizo, he took after the boy on foot. Fellow police officer Sigmund Cohn tried to stop him, whereupon Brundizo arrested Cohn for “interfering with an officer in the discharge of his duty.” (Cohn later convinced the judge he didn’t know the man was a brother cop until Brandizo brandished his gun.)

Police began rounding up boys. Victims held three rioters themselves to hand over to authorities. In all, some one dozen youths were arrested. Seven others were taken into custody and, when it was found they were under age 15, their parents were called to mete out justice.

But it was no laughing matter. Many people were hurt, with some requiring hospitalization. In another round of hat-related violence in 1924, a boater wearer was even beat to death.

What made the kids go Medieval on straw boaters? Class distinction was partly to blame. Many rioters were poor, and the boater was strongly identified with prosperous young stockbrokers, a symbol of the emerging Roaring Twenties’ nouveau riche set.

Fashion swept in the boaters, and fashion eventually carried them away. By 1930 they were passé, replaced by the more stylish Panama hat for men’s summer attire. The bizarre violence went away with them, too.

Surviving straw boaters are now prized collectibles. But if you happen to have one, you may want to keep it in the closet after the 15th.

You can’t be too safe.