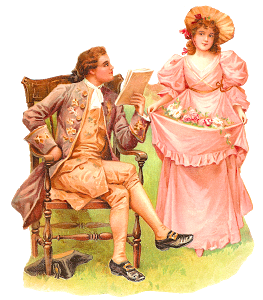 “Puritanism: the haunting fear that someone, somewhere might be happy.”   —H.L. Mencken

But they were strictest of all on that old bugaboo sex.

The Puritans didn’t fool around when it came to Fooling Around. (Thumb through Hawthorne’s “The Scarlet Letter” to see how they dropped the hammer when someone was discovered having illicit fun under the covers.)

So it boggles the modern mind to learn they encouraged the practice of bundling.

What is bundling, you ask? Good question. The custom is largely unknown today.

Bundling had nothing to do with those annoying insurance commercials you see every 15 minutes on TV where home, auto, and other policies are rolled into one package.

More than 200 years before Mick Jagger sang, “Let’s spend the night together,” Colonial America’s young people were doing it – right in front of their parents.

Bundling (also called “tarrying”) involved a young man and a young woman of marrying age spending the night together in the same bed. But because the Puritans were involved, it was more complicated than that.

New England winters were every bit as ferocious then as they are now. Furniture was expensive, and bed space was limited. (Ever heard the old saying, “Politics makes for strange bedfellows”? Bedfellows resulted from two people, sometimes complete strangers, sharing the same bed out of necessity.)

There was no dating as we know it today in Colonial America. So, there was very limited opportunity for prospective romantic partners to become acquainted with each other. Sometimes, it was as simple and direct as a man going to a woman’s father and saying, “Mr. Smith, I’d like to marry your daughter. Is that ok with you?” Even if she were agreeable, she could not wed without dad’s consent.

Bundling allowed young couples to take a test drive, of sorts. The custom was brought over from England and it was especially common among poorer people and those living in rural areas. Here’s how it worked.

The man proclaimed his interest to the girl’s parents. If he was suitable, it was then her decision whether she wanted to spend the night with him in bed. It’s important to understand the woman had the final say in this.

If she gave the green light, the couple chatted until bedtime. Then they stripped down to their undergarments and crawled in the sack. The dad placed a large “bundling board” down the middle of the bed. It was a kind of Berlin Wall marking his side and hers, with the explicit understanding that there was to be no physical activity of any kind between them.

The experience was intended to promote emotional, not physical, intimacy. The couple was expected to talk freely the entire night in a type of extended get-acquainted session. If they clicked, there was a strong expectation that the man would formally propose the next day.

To make sure everything stayed on the up and up, the girl’s parents often slept in the same room.

Some moms and dads even placed their daughter inside a “bundling bag” (with some varieties extending to the neck), just to be safe. However, that was an exception to the practice.

But as you can imagine, things often didn’t turn out as virtuously as planned. Reverend Andrew Burnaby wrote contemptuously in 1775: “A very extraordinary method of courtship is sometimes practiced among the lower people in Massachusetts Bay Colony … if they do not agree they part, and possibly never see each other again; unless, which is an accident that seldom happens, the forsaken fair one proves pregnant, and then the man is obliged to marry her, under pain of ex-communication [from the church].”

The “forsaken fair one” may have seldom got pregnant as a result of bundling, but a respectable number of “accepted fair ones” did. Meaning some Colonial American women walked down the aisle carrying a bundle other than flowers.

With the Victorian Era’s arrival, bundling fell out of favor. It was ridiculed as an outdated practice perpetuated by hicks and rubes. In time, it disappeared.

H.L. Mencken almost got it right. Puritans who practiced bundling had one night of happiness. Which probably explains why they spent the rest of their lives trying to make sure others didn’t.