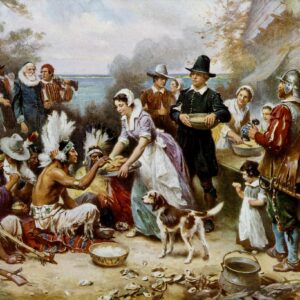 A holiday question persists year after year, probably stretching all the way back to the first Thanksgiving feast in 1621. “What are we going to do with all the uneaten turkey?”

(For a full range of post-Thanksgiving turkey menu options, turn to Ralphie’s gastronomical rant at the end of “A Christmas Story.”)

The Pilgrims, on the other hand, could have asked a different question after that first celebration exactly 400 years ago: “What are we going to do with all the empty kegs?”

Because the Pilgrims drank beer with their big meal. Lots and lots of beer, in fact.

It’s one tradition that somehow didn’t get passed down over the years. Which is why nobody ever says while gathered around Aunt Margaret’s elegantly appointed Thanksgiving table, “Pass the Pabst Blue Ribbon, will you?”

In fact, beer was the reason the Pilgrims set foot in Massachusetts in the first place.

After two months at sea, the travelers were facing several pressing problems. First, despite having originally set out for the Virginia Colony, they were way off course. The trip had lasted much longer than expected. But worst of all, they were running low on beer. Dangerously low.

Each person was issued roughly one gallon of suds every day. And although the journey was a one-way trip for the Pilgrims, Captain Christopher Jones and the Mayflower’s crew would have to recross the Atlantic to get home, and he worried there wouldn’t be enough to last.

William Bradford was growing anxious about the dwindling beer supply. That was why the group ultimately decided to drop anchor and set foot on Cape Cod. You know the story from there.

Let’s face it: Though they are key players in tale of America’s founding, Pilgrims weren’t exactly party animals. “Fun” is a word rarely associated with them. Then why did they drink so much of a beverage far more likely to be consumed at a frat party or biker rally than at a Baptist convention?

Because beer was how they stayed hydrated. The water carried onboard the Mayflower quickly grew brackish and turned into a health hazard. The brewing process killed dangerous organisms and made the water in beer safe to drink. Even when the Pilgrims finally came ashore in Massachusetts, they had to be very careful with the water they found there. Remember, there were no water departments back then to purify drinking water. Brewing it was their safest bet.

In fact, there’s a theory of human history that the discovery of distilled spirits — heavy on calories, light on dangerous microorganisms — was key to the development of modern society. Forget Homo Sapien. We should be honoring Homer Simpson.

And make no mistake—the Pilgrims weren’t popping open bottles of O’Doul’s non-acholic beer. The brewskis they downed (even the kids) contained six percent alcohol. It was the real McCoy.

As Puritanism spread throughout New England and safe water sources were discovered, beer consumption gradually fell out of favor. Since early preachers associated it with sin, it wouldn’t do to perpetuate its legacy during the annual fall feast. Beer was quietly erased from the menu of the first Thanksgiving.

Quite a few other items that were served in 1621 aren’t consumed at today’s Thanksgiving dinner as well. Not many Americans stuff themselves with venison, cabbage, peas, wild onions, or boiled cornmeal. All were likely served that first time along with grapes, gooseberries, and plums.