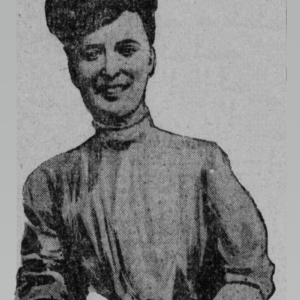 HOLY COW! HISTORY: The Body in the Trunk; Who Killed Elsie Sigel?

If the telegram was meant to reassure her parents, it didn’t work.

But the parents did worry. They hadn’t seen 19-year-old Elsie J. Sigel for days.

The Sigels were socially prominent New Yorkers. Grandfather Franz Sigel was a famous Civil War general. A German immigrant, he inspired adoring German Americans to sing, “I goes to fight mit Sigel.” When his statue was unveiled in 1907, 100,000 New Yorkers showed up. The Big Apple’s Franz Sigel Park still memorializes him.

Sigel’s son Paul was wealthy. Like many society women of that era, his wife Anne taught Sunday School at genteel St. Andrew’s Church on Fifth Avenue. But it wasn’t a typical Sunday School class. It specifically welcomed Chinese immigrants.

Americans then were wary of the Far East. Washington feared the “Yellow Peril” of a U.S. overrun by Asians. Christian missionaries were sent to evangelize the “heathen Chinese.” Chinese Sunday School classes were held in many cities. Young Chinese men viewed them as an opportunity to improve their English while networking.

Against her husband’s wishes, Anne took daughter Elsie to the class. They also volunteered at the Chinatown and Bowery Rescue Settlement and Recreation Room for Girls, a mission designed to get prostitutes off the street.

But Anne was unaware of the real reason behind her daughter’s interest. For unbeknownst to anyone, Elsie was attracted to Chinese men. That was a huge social no-no in 1909, especially for a famous general’s rich granddaughter. Had it become public knowledge, the scandal would have been enormous.

Fast forward to June 1909, Elsie’s mysterious disappearance, and her short telegram. Yet despite her reassuring words, she didn’t come home as promised.

After not seeing his nephew for several days, Leon’s uncle went to the apartment above a restaurant where Leon lived. A foul smell came from inside.

Police found a trunk tied with rope. Inside was the severely decomposed body of a nearly naked young woman, bloated beyond recognition, a noose tied around her neck.

They also found more than 100 love letters from adoring women. Thirty were from Elsie. Consider: “Just think of the sacrifices I made for you–my family, my friends. Don’t forsake me.”

Then investigators made a bombshell discovery; a bracelet with the initials EJS.

Paul Sigel denied it was his daughter’s. But Anne confirmed it, eventually having a breakdown from the strain of believing the missionary work had led to her daughter’s death.

The murder was national news. Police around North America rounded up any Asian man who vaguely resembled Leon. One suspect bore a closer look.

Chu Gain managed a popular Chinese restaurant that catered to upscale New Yorkers. He admitted having slept with Elsie and to receiving ominous, anonymous letters that said, “You know what will happen to you if you are seen with Elsie again. You’ll be killed and the girl, too.”

Elsie, it seemed, was the center of a love triangle, playing one Chinese lover against another. One of her letters to Chu said, “I don’t want you to feel bad because he (Leon) was here last night. You know I love you and you only and always will.”

At the same time, she was writing this to Leon: “Don’t think that I will ever give you up for anybody.”

Somebody, the evidence suggested, got jealous and decided to end things once and for all. But who was that somebody?

Conspiracy theories abounded. Leon had fled to China. Leon had hustled Elsie off as a human trafficking victim in an Asian brothel. And the most far-fetched of all: The couple had used Elsie’s family money to have another woman killed and stuffed into the trunk, with the pair fleeing together to China.

There was no “CSI: New York” in those days and the case was never settled. It remains a murder without a murderer.

There was one sad consequence to this sad story. For decades, Elsie’s torrid death was retold by those who believed the stereotype that Chinese men were opium fiends who abused White women. “That,” parents whispered to their daughters, “is what happens to young women who don’t behave properly.”

Their message: Elsie Sigel got what she deserved.

Strange to think so much bigotry resulted from a mother simply practicing a faith based on “Love your neighbor.”