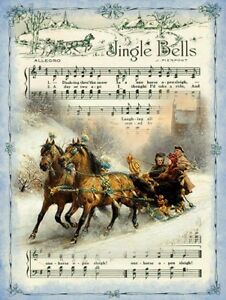 It’s one of the very first Yuletide songs the youngest of children learn. The lyrics are easy and its music is peppy, making it the ideal holiday song for little kids. Who among us hasn’t heard toddlers warbling at the top of their little lungs to adoring parents,

Jingle all the way.”

Mom and dad probably wouldn’t be beaming so happily if they knew the backstory of that beloved Christmas classic. Because when the song originally came out, it certainly wouldn’t have been considered “age-inappropriate” by today’s standards.

It was called “One Horse Open Sleigh” when it was first published in 1857. Even back then, its words conjured images of simpler, more carefree times.

It’s difficult for 21st-century minds to imagine now, but a heavy snowfall often brought a treat to 19th-century folks. Consider these lines from a letter written in February 1865 by a Union soldier to his girlfriend in Upstate New York. “I presume you did not fail to take advantage of the deep snow. I imagine I see you on a cold pleasant moonlit night gliding over the crystal surface preceded by nettlesome steeds and the pleasant ringing of musical bells which seem to mock the joyous laughter of you and your companions.”

After enjoying one such sleigh ride, James Lord Pierpont recognized a song was waiting to be written.

He was an interesting character. Son of a New England minister, he ran away to sea at age 14, later returned, married, and started a family. He settled in Medford, Massachusetts where his father pastored a Unitarian Church. The urge to wander returned with the 1849 California Gold Rush. Pierpont wound up in San Francisco where had a store and a photography studio before losing both in a fire. He returned to New England flat broke.

After his wife died in 1856, Pierpont’s brother accepted the pastorate of a Unitarian Church in Savannah, Georgia. Pierpont tagged along to serve as music minister. He wrote songs and gave organ and singing lessons on the side, all the while composing a steady stream of music himself. He became successful enough to take the daughter of Savannah’s mayor as his second wife.

In 1857 he released the song we still sing today. But “One Horse Open Sleigh” bombed so badly when it came out that he had to rebrand it. It was re-released in 1859 as “Jingle Bells.” Even then it was far from a best-seller.

Ironically alcohol, not schoolkids, spread the tune. “Jingle Bells” became a popular mid-Victorian drinking song with singers clinking their glasses to imitate the sound of bells. And get this–the lyrics were even considered racy for the time, too. A young couple sleigh riding without a chaperon? Hubba-hubba! Risqué stuff.

Despite the initial setbacks, “Jingle Bells” has stood the test of time. But one question still lingers: Where exactly did Pierpont pen the piece?

Medford, Massachusetts, and Savannah, Georgia each claim to be the song’s birthplace. A plaque in downtown Medford asserts Pierpoint wrote it at the Simpson Tavern in 1850. It even cites a Mrs. Otis Waterman who said she remembered it.

Nonsense, Savannah adherents huff. Just look at the calendar. Pierpont was living in that coastal city when the song was first published. It stands to reason it was written there as well.

Which claim is accurate? Who knows! While history lovers like to nail down these little details, in this case, it really doesn’t matter.

From the moment it was recorded for the very first time on an Edison wax cylinder in 1889 to countless elementary school Christmas concerts around the country in 2021, it remains a timeless favorite. Which is why James Lord Pierpont is honored in the Songwriters Hall of Fame.

So, remember him the next time you belt out “Jingle Bells” at a Christmas party. And if the kids have been put to bed, go ahead and clink your glasses. Pierpont wouldn’t mind.