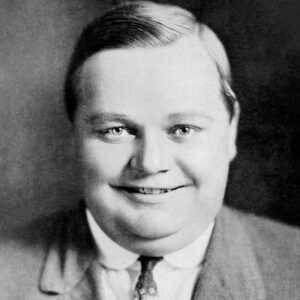 No. It was Hollywood in real life.

Exactly 100 years ago this month, America was engrossed in perhaps the biggest Hollywood scandal of all time. In September 1921 a young actress was dead, a major movie star’s career was destroyed, and the entire motion picture industry faced extinction.

All because of a single party gone terribly wrong.

America’s love affair with movies was in full bloom a century ago. Folks took to the new medium with a passion. They also embraced the popular perception—carefully nurtured by studio heads—of Hollywood as a kind of Neverland where stars wholesomely frolicked in the sun like carefree teenagers. With a major morality push underway just then (Prohibition had become the law of the land the year before), movie moguls made sure their box office breadwinners appeared squeaky clean.

That carefully-crafted illusion was shattered in a San Francisco hotel room.

At the center of the storm was 300-pound celluloid darling Roscoe “Fatty” Arbuckle. He had slogged his way up the entertainment ranks, paying his dues while mastering the art of comedy. He made cinematic history in 1913 by becoming the first comic to get hit in the face with a pie on screen.

Arbuckle worked alongside silent movie legends, including Charlie Chaplin, Buster Keaton, and the Keystone Cops. He may have practiced slapstick comedy, but he stood out from the pack with his clever wit. And his obesity was always part of the gag.

Fatty eventually was earning a staggering $1,000 per day ($30,000 in 2021 dollars) plus 25 percent cut of the profit. Additionally, he had the one thing performers covet most: complete artistic control.

By 1921, Fatty Arbuckle was second only to Charlie Chaplin as America’s favorite funnyman.

When it was over, Virginia Rappe, a 20-something model and movie actress, was seriously ill. She was hospitalized with a ruptured kidney, developed peritonitis, and died four days later.

Two days after that, Arbuckle was arrested.

One partygoer, a woman with a shady past, claimed Fatty had raped Rappe. San Francisco’s DA harbored dreams of being elected governor and he swooped down on Arbuckle without doing legal due diligence.

Fatty Arbuckle bore the brunt of it, falling from movie poster favorite to poster boy for lascivious lifestyles. Wild rumors spread like wildfire. His enormous girth had caused Rappe’s bladder to burst, he had raped her with a bottle. Many of those rumors persist to this day.

Whatever his faults, for he certainly was no choirboy, it appears Arbuckle didn’t rape Virginia Rappe. It was later learned she suffered from cystitis and had previously had a venereal disease, suggesting her health was in delicate condition before the events of September 5, 1921. A weekend of bootleg hooch didn’t help.

Fatty was tried and acquitted in three trials over seven months. When the third concluded in April 1922, jurors took the highly unusual step of apologizing to him! “Acquittal is not enough for Roscoe Arbuckle. We feel that a great injustice has been done to him … for there is not the slightest proof to connect him in any way with the commission of a crime.”

But the damage could not be undone. The industry eventually regained much of the public’s trust by instituting the Hays Code that made sure movies were so innocent, nuns playing a hand of pinochle looked racy in comparison.

A decade later, Fatty finally persuaded Warner Brothers to let him appear in short comedies. On June 29, 1933, he signed a contract to finally star once more in a feature film. It was also his first wedding anniversary with his second wife. He told friends, “This is the best day of my life.”

That night he suffered a heart attack and died in his sleep. He was 46, a victim of whatever had happened a dozen years earlier in Room 1219 at that San Francisco hotel.