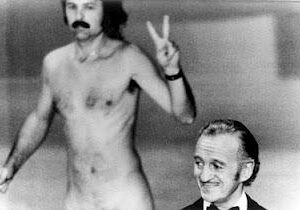 Springtime always reminds me of a crazy fad from the 1970s. It arrived out of nowhere, flying by in a fleshy blur that left some people horrified, others amused, plus a good many unsure just what to make of it. And in a flash, it was gone.

This is the short, strange story of streaking.

Before we skinny dip into the depths of this bizarre phenomenon, let’s strip away the years and revisit the early 70s.

America was in a profound funk. The nightmare of the Vietnam War had finally ended, replaced by a seemingly endless scandal called Watergate. New phrases like “energy crisis,” “Arab oil embargo,” and “runaway inflation” entered our vocabulary. There was the uneasy feeling that things weren’t only bad, they were getting worse.

Amid this gloom, some unknown person, somewhere in America, decided to take off all his clothes and run past strangers as fast as he could. In broad daylight, no less. At that moment streaking was born.

Americans have always been bonkers for fads. But this one was different. While other goofball crazes caused annoyance, streaking was intended to playfully traumatize. You never knew when or where a streaker might come whizzing by. Which was part of its appeal.

To borrow from Richard Nixon, let me make this perfectly clear: Streaking was totally different from flashing or indecent exposure. People who commit those crimes do so for sexual gratification. Streakers, most of whom were Baby Boomers who delighted in tweaking the noses of their Greatest Generation parents, did it for shock effect. There was a strange innocence to it.

Streakers tended to be overwhelmingly (though not exclusively) male and in the full bloom of youth. Which worked to their advantage since young people run fast and aren’t encumbered by trying to put various body parts back in their original place.

Best of all, anybody could do it. All you needed was a birthday suit, a pair of running shoes and perhaps a hat (if you were so inclined; headgear was strictly optional).

Overnight, America was obsessed with streaking. After a steady news diet of Nixon’s woes and worsening pain at the gas pump, folks enjoyed chuckling at college kids appearing au-naturel. It was scandalous, titillating, and a tad amusing, all at the same time.

Streak Mania was in full force by Spring 1974. Comedian Ray Stevens cashed in on the craze with his hit single The Streak. (Remember its catchphrase? “Don’t look, Ethel!”)

The fad’s highwater mark came during the 46th Annual Academy Awards on April 2, 1974. Just as the night’s biggie, Best Picture, was about to be announced, a naked man dashed across the stage (and into millions of homes watching on live TV), flashing the two-fingered peace sign. Poor dashing, debonair David Niven had the misfortune of being at the podium. But he turned it into Oscars history by quipping, “Isn’t it fascinating to think that probably the only laugh that man will ever get in his life is by stripping off and showing his shortcomings?” (That streaker was killed during an armed robbery the following year, incidentally.)

I confess here and now that I never Streaked. It didn’t appeal to me, and since seeing a gangling 13-year-old naked adolescent didn’t appeal to anyone else, either, that worked out well for everyone. But a close friend did streak. Because several of our classmates read this column and know the guy (and also because I don’t want this now accomplished professional to kill me), I’ll call him “Raymond.”

Around midnight one Friday night that spring, Raymond peeled off everything and ran down his quiet Joplin, Missouri residential street while his neighbors slept. He called it “exhilarating.” I pointed out it didn’t qualify as true streaking because nobody saw him. But Raymond dismissed that as a technicality. Witnesses or not, he had run naked in public which, in his eyes, made him a bona fide streaker. Case closed.

Then, as quickly as it had arrived, streaking vanished. Nixon’s resignation that summer left little interest in antics. Streaking’s brief shining moment was over.

The 70s resumed its dreary slog on the treadmill of misery. At least streaking had brought us a moment of levity.

We needed it, too. For unbeknownst to us, the decade’s true horror–Disco Dancing–was lurking right around the corner. Once it was unleashed, seeing someone dash by in the nude didn’t seem so bad after all.