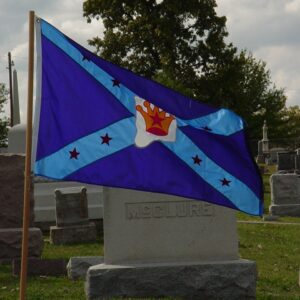 Flag of the Kingdom of Callaway flying at a ceremony honoring fallen soldiers of the American Civil War.
[IS] Opinions

If you’re of a certain age, you remember being herded onto a school stage for a patriotic assembly and warbling “Fifty Nifty United States” to beaming parents.

“Fifty, nifty, United States from thirteen original colonies,” the song cheerfully began. There wasn’t much to it beyond rhyming “fifty” and “nifty.” It proceeded to meander through a rollcall of the states in alphabetical order. Missing from that roster was the Kingdom of Callaway. And the Free State of Winston. And the Free State of Jones.

Each briefly existed–more or less–during the Civil War. And it’s worth revisiting their strange stories.

Today, the Civil War is viewed as a struggle between neatly aligned Northern and Southern states. But the reality was far more complicated. It was easy to be for the Union in Vermont or solidly Confederate in Alabama. However, the closer you got to the middle of the country, the murkier things grew. People there were pulled in both directions. Mark Twain observed, “It was hard for us to get our bearings.”

Consider Missouri’s Kingdom of Callaway. Callaway County is located in a part of the Show-Me State still called Little Dixie, and its wartime sentiments were staunchly pro-Southern.

In October 1861, a lawyer named Col. Jefferson Jones popped up as commander of a little ragtag pro-Confederate band of old men and young boys. (Jones’ colonelcy appeared out of nowhere, too. There’s no record of him being appointed to that rank, though lots of “colonels” on both sides mysteriously materialized in the war’s early months.)

Jones got wind Union General John Henderson was approaching with 600 militiamen. In a bluff that would have made a poker player proud, Jones marched his little group toward the Federals, parading them in a loop to seem larger than they were. He hauled out several “Quaker guns,” logs stripped of bark and painted black to look like cannons from afar, and pointed them at the Yankees.

Jones then offering Henderson a deal. If Henderson promised to not occupy the county (which Jones grandly called the Kingdom of Callaway), Jones would disperse his “superior forces” and go home. If Henderson refused, there would be a bloody battle.

Believing discretion the better part of valor, Henderson accepted. He even signed a peace treaty of sorts between Callaway County and the United States! The matter ended in a Confederate “victory” without a shot being fired. Locals felt the phrase the Kingdom of Callaway had a nice ring to it and adopted it as their nickname.

Kingdom or County, Callaway’s neutrality didn’t last long. The real Union army arrived a few months later, laughingly ignoring the “peace treaty” as it seized the place. Jones was captured and spent the war in a St. Louis prison. Henderson was appointed to the U.S. Senate, where presumably he was more helpful to the Union war effort than he had been on the battlefield.

Meanwhile, trouble was brewing 530 miles away in the rugged hills of north Alabama. When that state’s secession convention was called in 1861, it didn’t sit well with Winston County folks. So, they held their own convention on July 4, 1861, at Looney’s Tavern. (I’m not making that up). They passed a resolution declaring they wouldn’t take sides or participate in the war. That made a pro-Confederate lawyer snidely snort, “Winston County secedes, eh? Well, hooray for the Free State of Winston!” The locals took a shine to the name.

A similar story unfolded in nearby Jones County, Mississippi. When picking its delegate to their state’s secession convention, residents overwhelmingly elected anti-secessionist John Hathorne Powell, Jr. (No relation.) He voted against Mississippi leaving the Union and was burned in effigy.

Jones and neighboring Covington Counties were flooded with Confederate Army deserters, who found a warm welcome among Unionist locals. The area descended into lawlessness. Old scores were settled with guns. A band of ex-Confederate soldiers fought at least 14 skirmishes with Confederate troops.

Chaos followed. By 1864, the U.S. flag was flying over Winston’s courthouse. That July, a Natchez newspaper reported Jones County had seceded from Mississippi (and the Confederacy). It was a nasty, bitter situation, with deep undercurrents of racial prejudice also playing out.