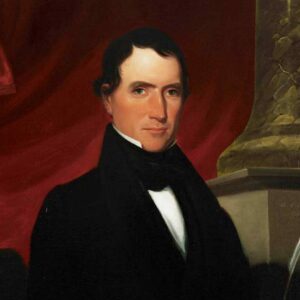 HOLY COW! HISTORY: The Veep Who Didn’t Go to DC

Remember the old James Stewart classic “Mr. Smith Goes to Washington”? A political rookie is appointed U. S. senator out of the blue and then — spoiler alert! — goes to Washington.

Nearly 170 years ago, a man became Vice President of the United States without going to Washington. He never even set foot inside the Capitol the entire time he had the job. Here’s why.

There was a heap of celebrating in the Heart of Dixie in December 1819. Alabama had just been admitted to the Union as the 22nd state. Much of the hard work in securing statehood had been done by a 33-year-old lawyer named William Rufus DeVane King. (He also wrote the state’s first constitution.)

Born into a wealthy North Carolina planter family, he’d only arrived in the Alabama Territory the previous year. King created a cotton plantation called Chestnut Hill on land that became known as “King’s Bend” outside the city of Selma (which he selected the name for, by the way, taking it from the 18th-century poem “The Songs of Selma”).

Alabama’s legislature showed its gratitude for all of King’s efforts by making him one of the state’s first senators. He quickly got on the fast track, becoming president pro tempore of the Senate and a behind-the-scenes power broker. Over the next 30 years, he helped pass such landmark measures as the Compromise of 1850 as well as serving a stint as ambassador to France.

But King’s home life set Washington’s tongues wagging. He shared a house with fellow senator and lifelong bachelor James Buchanan. There were lots of whispers and finger-pointing about the pair’s, ahem, closeness. (Andrew Jackson called King “Miss Nancy.” Let’s leave it at that.)

When the 1852 election rolled around, King’s Democratic Party picked former senator and general Franklin Pierce of New Hampshire as its presidential nominee. Back then, when a Northerner was selected for the top of the ticket, a Southerner was selected as his running-mate (or vice versa) for balance.

With a New England Yankee at the head of the ballot, Alabama’s King was tapped for the Number Two spot.

It was a match made in electoral heaven. The Pierce-King ticket won in a landslide so large it literally killed the rival Whig Party. (When you drive your opponents to extinction, that’s a serious victory.)

But amid the Democrats’ jubilation, there was a very serious problem. Although it wasn’t widely known among everyday Americans, King was seriously ill.

He was so sick with advanced tuberculosis, in fact, that when Inauguration Day arrived on March 4, 1853, King wasn’t on hand for the ceremony. He was in Cuba, where it was hoped the warm winter weather would preserve his deteriorating lungs. It didn’t.

So, Congress passed a special act allowing him to take the oath of office outside the United States. King was sworn in as America’s 13th vice president in Matanzas, Cuba on March 24, 1853.

He grew so weak it was obvious he would never see Washington again. He was taken home to his beloved Chestnut Hill plantation in Alabama, dying there on April 18, just two days after his arrival.

King never presided over the Senate or performed any other official duty. With no constitutional mechanism for filling the office (that didn’t come along until the 25th Amendment went into effect in 1967), the position sat vacant for more than three years.

King only held it for 25 days, the shortest tenure of all 49 vice presidents and five fewer than William Henry Harrison’s 30-day presidency. His face has never appeared on any coin, currency, or postage stamp.

Yet his bust has graced the halls of Congress for over 125 years along with those of other veeps, a silent reminder of the man who never got the chance to go there and do the job Americans elected him to do.