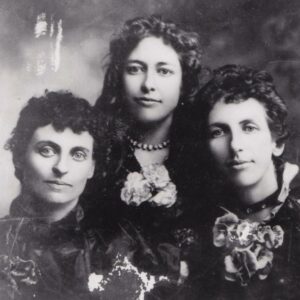 Pop culture fans know the phrase “It’s so bad, it’s good!” And while it sounds like an oxymoron, it’s undeniably true. Think William Hung, whose atrocious rendition of “She Bangs” on American Idol earned worldwide derision– and fame. And it was the entire premise of The Gong Show, not to mention most Adam Sandler movies.

A century ago, one show biz act blazed new trails in awfulness, becoming a national sensation, and setting an important legal precedent along the way.

This is the sad, strange story of the Cherry Sisters.

There have been many good sister acts over the years. The Andrews Sisters, the Lennon Sisters, and the Maguire Sisters to name a few. But the Cherry Sisters weren’t among them.

Raised in rural Linn County, Iowa in the late 1800s, Addie, Effie, Ella, and Jessie Cherry were typical farmgirls. Their lives abruptly changed in the early 1890s when their parents died. And their brother Nathan, apparently less-than-thrilled by the prospect of being stuck on the farm with four sisters, soon disappeared into the night.

The girls were alone.

Short on cash, they turned to their (supposed) talent to make ends meet. A big world’s fair was being held in Chicago in 1893 and they staged a fundraiser in their hometown opera house to travel to it. In an act they called “Something Good, Something Sad,” the Cherrys sang, performed morality plays, and did inspirational readings—all remarkably badly.

No one had the heart to tell the orphans just how rotten they were. The sisters mistook that politeness for a show of support. So, the Cherry Sisters headed to Chicago to make it big.

They found a talent agent and auditioned for him. As he watched the hayseed act in their cheap, homespun dresses, it dawned on him they were so terrible, audiences would pay to see just how bad “bad” could be.

They hit the small-town vaudeville circuit, performing in any burg big enough to have a theater. Something interesting happened: Audiences not only hated the corny quartet, they loved hating it. People threw rotten tomatoes, bad eggs, and other vegetative matter past its prime at the stage. The Cherrys eventually performed behind a wire mesh for their protection.

The sisters stayed financially afloat, but just barely. Then, for some twisted reason nobody understood then or now, they decided they were ready for the big time. In 1896 they set out to conquer Broadway.

Their timing was perfect. Willie Hammerstein was looking for something to save his floundering Olympia Music Hall. (His son Oscar later became the Hammerstein of Rodgers and Hammerstein fame.) He thought, “I’ve been putting on the best talent and it hasn’t gone over. I’ll try the worst.” And it worked. It only took twelve days to save Hammerstein from bankruptcy.

The problem was, New Yorkers weren’t coming to enjoy the Cherry Sisters; they showed up to laugh at them. Newspapers piled on abuse, too. The New York Times headlined its scathing review, “Four Freaks From Iowa: A Spectacle More Pitiable Than Amusing.” And that was one of the kinder stories.

Editors competed with one another to see which could be most cruel. Consider this from The Cedar Rapids Gazette: “They were simply awful … At one minute the scene was like the incurable ward in a lunatic asylum; the next it was like a camp meeting. Cigars, cigarettes, rubber boots, anything was hurled at them. Yet they stood there awkwardly bowing their acknowledgment and singing on.”

When a Des Moines newspaper reprinted a column saying, “Their long skinny arms swung mechanically, waving frantically at the suffering audience. Their mouths opened like caverns, issuing sounds like the wailing of the damned,” the sisters had enough. They sued for $15,000 (nearly $5000,000 today), claiming defamation. A local jury ruled in the newspaper’s favor, so they appealed to Iowa’s Supreme Court. It ruled journalists have the right to comment on and give critical analysis of public entertainment. The 1901 Cherry v. Des Moines Leader was a landmark ruling still cited today.

It was all downhill from there. Jessie died suddenly in 1903, but the sisters struggled on. Two of them were still performing in the 1930s. Their name had become a gag line; as late as 1964, Ozzie Nelson got laughs by mentioning them on The Adventures of Ozzie and Harriet.

Historians are split over the notorious act. Were they actually brilliant comedians like Andy Kauffman and Tiny Tim who were in on the joke and got it? Or were they truly innocent, simple, country folk who didn’t realize just how terrible they really were? We’ll never know.