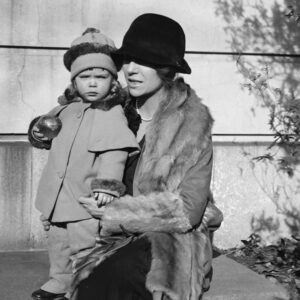 It’s not easy being political royalty. The Kennedys, Bushes, and Adamses all had a tough time of it. But few of America’s First Families ever had a member with a story as heartbreaking as Pauline Longworth.

Even her birth was foreshadowed by tragedy. Paulina entered the world on February 14, 1925—exactly 41 years to the day after her grandmother and great-grandmother both died.

She also began life with the bluest of political blueblood as the granddaughter of President Theodore Roosevelt. Her mother, Alice Roosevelt Longworth—the original White House Wild Child—was a celebrity and keeper of the flame for the illustrious family’s Republican branch.

Alice’s husband was Nicholas Longworth, Speaker of the House of Representatives and namesake of today’s Longworth House Office Building. Their courtship had been national news and their 1906 wedding ceremony was covered with minute-by-minute telegraph updates, the Edwardian Era’s version of live satellite coverage.

But being Alice’s spouse did not make him Paulina’s daddy. Both Longworths indulged in affairs. Alice’s relationship with the very powerful (and very married) Sen. William Borah of Idaho was a scandalously open secret that fueled Capitol Hill gossip mills. It was widely suspected he was Paulina’s father, and although the baby was born long before DNA paternity tests could prove it, he probably was.

Despite the murkiness surrounding her conception, Speaker Longworth was exceptionally fond of the girl. She adored him in return. Paulina’s world was shattered when her father figure unexpectedly died during a visit to Aiken, S.C. when she was six.

Paulina’s relationship with her mother, however, was totally different.

Independent Alice was into herself, not motherhood. She considered little Paulina (which was pronounced “Pole-eena,” incidentally) a bothersome nuisance. She was a domineering woman who bullied her only child to the point that Paulina developed a stutter. Tellingly, it grew worse in her mom’s presence. The task of raising the girl fell to a nanny who was strict and equally compassionless.

Alice demanded shy Paulina act like an extrovert, then sabotaged her by making her wear drab, homely dresses. Katherine Graham, legendary publisher of The Washington Post, remembered her as “a rather sad girl …pale and not done up.”

But one physical feature stood out amid her bleakness: Green eyes that glowed like emeralds. They were striking and unusually lovely, though denied their full impact by her painful lack of self-confidence.

Distant cousin Eleanor Roosevelt, who had been an awkward lonely girl herself, recognized the pain. She made a point of frequently inviting Paulina to the White House to play with her young cousins Sisty and Buzzy Dall.

On the rare occasions she felt safe and secure, Paulina briefly blossomed. For instance, there was the time late one night at boarding school when—dressed in pajamas—the teenager reenacted her grandfather’s famous charge up San Juan Hill, to the hilarious laughter of her dormmates. But those moments were few and far between.

After one year at Vassar, the pressure of college life proved too much and she was forced to return to living with her mother. The stutter quickly returned, too.

Her life took a dramatic turn a few years later when she met Alexander Sturm. The dashing Yale grad was a true Renaissance Man—author, artist, and entrepreneur. From a wealthy socially prominent family himself, Alexander had no problem standing up to Alice and became the fragile Paulina’s protector. They married in August 1944, moved to Connecticut, and began a new life together.

Alexander was co-founder of Sturm, Ruger & Company, one of the nation’s largest gunmakers. Paulina passionately supported her husband’s company, enthusiastically stuffing envelopes promoting the startup business. Things only got better when daughter Joanna was born in 1946.

Paulina was the kind of mother she had been denied. Loving, doting, attentive, involved in every aspect of raising her child. It had taken 21 years, but Paulina had finally found happiness.

In an instant, the bottom fell out.

Paulina resisted depression’s dark pull. She converted to Catholicism, plunged into volunteer work, and became even more involved in raising her daughter than ever. Yet nothing helped.

The Washington princess’s story sadly concluded on January 27, 1957, with an overdose of sleeping pills. Republican royalty to the very end, Vice President Richard Nixon was a pallbearer at her funeral. She was only 31.

There was one positive development after her death. To everyone’s surprise, Alice Longworth asked to raise her young granddaughter. Maybe she belatedly realized the toll her selfishness had taken on Paulina and sought a second chance with Joanna. Though their relationship was initially rocky, the two women grew quite close and remained so until Alice passed away at age 96 in 1980.