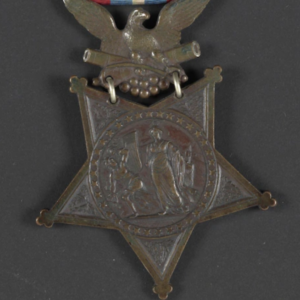 HOLY COW! HISTORY: When the Army Took Back the Medal of Honor

Displaying heroism worthy of receiving the Congressional Medal of Honor is hard. Having that distinction taken away from you is even harder.

A century ago, the U.S. Army told almost 1,000 aging veterans they weren’t qualified for our nation’s highest military honor which they had been presented decades before. It’s a sad, sad story.

The Congressional Medal of Honor was created in 1861 and awarded during the Civil War. More were presented during the Indian and Spanish-American Wars.

But as the 20th century began, there was grumbling in the ranks. Not all of recipients deserved the honor, and that rankled some people.

In 1916, Congress established the Medal of Honor Review Board, a panel of five former generals, and tasked it with determining “what Medals of Honor, if any, had been awarded or issued for any cause other than distinguished conduct.”

Each case was reviewed individually. Board members based their decision on one criterion: Did the presentation meet the letter of the law?

The final report that came out in 1917 was a bombshell. A total of 911 names were removed from the nation’s Roll of Honor, whose members receive the Medal of Honor.

Some never should have got the Medal in the first place. The most absurd example was Civil War veteran Asa Bird Gardiner, who simply wrote to the War Department saying, “I understand there are a number of bronze medals for distribution to soldiers of the late War, and request I be allowed one as a souvenir of memorable times past.” And Gardiner was given the Congressional Medal of Honor on September 23, 1872!

All 29 of the soldiers in the honor guard at President Lincoln’s funeral received the Medal. Was that service significant? Yes. Was it heroic? Not at all.

Then there was the strange case of the Maine infantrymen.

The Union was in crisis in June 1863 as the Confederate army was barreling into Pennsylvania. The Federal response to the invasion left Washington, D.C. almost defenseless.

At that very moment, the enlistments of two infantry regiments stationed in the capital were expiring. Lincoln begged the 25th Maine Infantry to stick around a little longer. The men essentially said, “Sorry, Abe, we’re out of here” and went home.

Desperate, Lincoln (ever the master politician) offered the Medal to anyone in the 27th Maine who stayed on until the crisis had passed. Of its 864 officers and men, 311 remained in the ranks. They hung around D.C. for four extra days (during which they saw no combat) until Robert E. Lee’s defeat at Gettysburg.

And for those four days, they got Medal.

But instead of giving it to just the 311 men who stayed on, in 1865 the War Department sent 864 Medals to Maine’s governor, one for each man in the regiment. He didn’t know what to do, so he forwarded them to Colonel Mark Wentworth, who had commanded the 27th during its “four days of meritorious service.”

Wentworth knew the Medal should mean something and shouldn’t be handed out willy-nilly. He tracked down as many of the 311 as he could and gave them their Medal. He put the more than 500 others his barn, where thieves stole a good many. Nobody knows what happened to the rest after Wentworth died.

The Board revoked 12 Medals because the recipients just didn’t deserve it. One had put out a fire in a warehouse. Another turned out to be a British citizen, and thus ineligible. Still another was cited for simply delivering a message (and not under fire, either).

Board members were genuinely pained to rescind the Medal for six others who had performed heroic duties. But as civilians, not military members.

Take Buffalo Bill Cody. The legendary Wild West Show creator had been a scout on the Great Plains and provided valuable information—at great personal risk—to the cavalry. But he was a civilian employee, and thus ineligible to receive the Medal.

The most famous case was Dr. Mary Walker. When the Civil War erupted, she tried to enlist as a physician, but was told she could only be a nurse. She persisted and was eventually employed as a “Contract Acting Assistant Surgeon (civilian)” by the Army of the Cumberland in September 1863, becoming the first female surgeon employed by the Army.

On the recommendation of General William Sherman, Walker received the Congressional Medal of Honor on November 11, 1865. She remains the only woman receive it and wore the Medal almost every day for the rest of her life.

Walker was 84-years-old when she was informed her honor had been rescinded. Her response: “Let them come and get it.” And she went right on wearing it until she died two years later.

Which raised an interesting point: Then what happened?

It was a terrible shock to those 911 recipients whose Medals were rescinded. They were in their 70s and 80s then; the humiliation was deep. The Medal was the achievement of a lifetime. Now their family and friends and all America were being told they hadn’t deserved it.

The Army didn’t want to make things more embarrassing for former recipients. So, it never actually asked them to return the Medal. When the question arose whether the 911 could continue wearing it in public, the Judge Advocate General gently advised the Review Board that the Army had no obligation “to police the matter.” The subject was quietly dropped.

In 1977, after decades of lobbying, Congress finally returned Dr. Mary Walker, Buffalo Bill Cody, and the four other civilians to the nation’s Roll of Honor.

The other 905 remain trapped in historical limbo. Their families say they’re Medal recipients, but the military doesn’t.

Stories from history don’t always have clear winners and losers. Nor happy endings. Sometimes, it’s just a tale of something that happened. And so it was with the Medal of Honor Review Board and its sad, sad task.