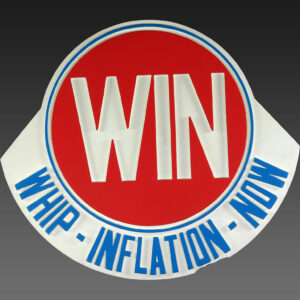 “… the wholesale price index—precursor of what’s coming on the consumer front—had gone up a staggering 2.3 percent last month. That brought the wholesale price increase over the last year to 22.6 percent, the highest rate in a quarter-century and nearly double the climb in family living costs.”

Almost 50 years ago, America was in the same economic boat it is in today. The phrase “runaway inflation” entered the nation’s vocabulary as retail prices rose, then rose some more, then rose yet again. Even worse, it seemed there was no end in sight. Inflation had arrived, put down roots, and decided to stay a while.

In time, ever-increasing prices led to the birth of yet another phrase: The “misery index.” It combined the rates of inflation and unemployment to catalog the harm both were inflicting on Americans.

Politicians are hypersensitive to economic unpleasantry. With trust in government severely eroded by the twin debacles of the Vietnam War and Watergate, it seemed Washington wasn’t up to the task of fighting a serious foe on the financial front.

Then the only president who was never elected to the presidency had an idea.

We could beat inflation by wearing buttons. No, seriously. He did.

Gerald Ford was D.C.’s original Mr. Nice Guy. A star college football player at Michigan and a World War II veteran, he was elected to Congress in 1948, rising through Republican ranks and eventually becoming Minority Leader in 1965. His dream was to end his career as Speaker of the House. But with Democrats firmly entrenched on Capitol Hill that looked unlikely. (Indeed, the GOP wouldn’t reclaim the House until 1994). Ford seemed destined to spend his days being just another guy in a gray flannel suit.

Then Fate stepped in. When President Nixon’s VP Spiro Agnew resigned due to sleaziness from his previous tenure as governor of Maryland, Ford was chosen to become vice president. When Nixon was forced to walk the plank over Watergate, Fate smiled once more.

Initially well-liked by public and pundits alike, President Ford’s popularity took a serious hit when he pardoned his predecessor for any crimes Nixon may have committed while in office. His approval ratings were racing down just as rapidly as inflation was driving prices up. Barely 60 days into office, Ford knew he had to act fast to keep his presidency from skidding into the ditch.

Which is where the WIN button enters our story.

When October 1974 began, the new president kicked off his campaign to enlist everyday Americans in the fight to beat inflation. He asked them to send him their 10 suggestions for ways to stop rising prices. (That was long before David Letterman’s Top 10 comedy lists, remember.)

He followed that up with a gimmick. Speaking to a joint session of Congress on October 8, many Americans expected to learn details of his plans for beating back higher prices. But when they turned on their TV sets that night, they saw their president wearing a bright red button with “WIN” in bold capital letters.

WIN, Ford explained, stood for “Whip Inflation Now.” He tried to resurrect the spirit of public support that had made the war effort so successful during World War Two some 30 years earlier. He encouraged all Americans to wear WIN buttons as a sign of solidarity.

However, Baby Boomers and their Greatest Generation parents alike were not in the mood to sacrifice. Hitler and Hirohito weren’t lurking offshore this time. Americans saw their hard-earned dollars going to faceless big businesses and corporations. And they wanted Washington to stand up to them rather than grow gardens and carpool as Ford suggested.

Economists politely pointed out such baby steps by the public would barely make a dent in inflation. Comedians had a field day. They drew big laughs by wearing the button upside down and explaining “NIM” (WIN backward) stood for “No Immediate Miracles.”

The Whip Inflation Now campaign died a quick death, killed off by a combination of guffaws and indifference. WIN buttons quietly went the way of the Edsel, New Coke, and other classic marketing Hindenburgs.

You can still find them for sale on eBay and in antique stores. But you’d better grab one fast; with Washington’s “spend like there’s no tomorrow” reckless fiscal policy roaring inflation back to life, their price will be going up soon.