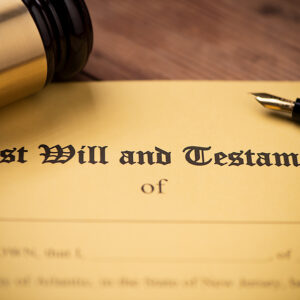 Ben Franklin may have been right that “nothing can be said to be certain, except death and taxes,” but we hate preparing for both.

Many people put off writing their last wills and testaments, perhaps to avoid confronting their own mortality. But when they do, their decisions about distributing their estates can reveal much. Let us consider the quirky, eccentric, and downright weird tidbits tucked in the farewell documents of famous folks:

You learned as a child, “Listen my children and you shall hear, of the midnight ride of Paul Revere.” He was a true Patriot—and a darn good silversmith, too. Which made him wealthy in Revolutionary Boston.

But Paul had a beef with one relative. He left his children and grandchildren $500 each — a big chunk of change in 1818 — with one exception: One grandson received just $1. Imagine the family discussion when that will was read! Historians aren’t sure why the grandson fell out of favor.

Her literary career was so successful that when she died in 1896 she left her son valuable railroad stocks—and a Florida orange grove.

Daniel Webster was a flinty Granite Stater who served as senator, secretary of state, and who fictitiously bested Satan in “The Devil and Daniel Webster.” But he couldn’t best death.

When his time came in 1852, his will disposed of every last belonging, including his fishing tackle and a gold snuffbox decorated with George Washington’s likeness. A lucky grandson got those goodies. (And what young boy wouldn’t want a gold snuffbox?)

J. P. Morgan was the richest man in America in his day. We’re talking Jeff Bezos, Warren Buffett, Bill Gates wealth. During the Panic of 1907 Morgan personally saved the U.S. government from bankruptcy. That’s how rich he was.

When he died six years later, his handwritten will left “One Million Dollars” (the emphasis was his) to his wife. That would be nearly $40 million today. The Widow Morgan did not go without.

W.C. Fields called death the Man In The Bright Nightshirt. He may have been a brilliant comedian, but he was also deeply paranoid, often imagining people were out to get him. And he repeatedly changed his will on a whim.

The provision was in the final will when the Man In the Bright Nightshirt came for him on Christmas Day, 1946. Fields’ estranged wife and son used that clause to challenge the will in court.

Adolf Hitler was a horrible human being. So, it’s no surprise his final wishes contained horrible ranting.

Dictated in a Berlin bunker in the last hours of his life, with Russian soldiers literally outside the door, he left his art collection to “a gallery in my hometown of Linz on the Danube” (which was never established) and bequeathed “items of sentimental value or necessary for the maintenance of a modest simple life” to a handful of relatives and “faithful co-workers” in his inner circle. The rest was to be given to the Nazi Party. But since there wasn’t any party after his suicide, the will was moot.

Then there was his last testament, in which he insisted World War II wasn’t his fault. Nothing was ever his fault (to him, anyway). “It is untrue that I or anybody else in Germany wanted war in 1939.” He was a liar and lunatic right up to the very end.

Finally, history provides an object lesson. Abraham Lincoln died without a will. Remember what he did for a living before the presidency? He was a lawyer. That’s right; the man famous for writing the Gettysburg Address forgot to write a will for himself, thus proving the old saying, “Cobbler’s children need shoes.”

That caused tremendous problems for his widow, the emotionally tormented Mary Lincoln. Settling the estate was a long, bitter, costly affair that played out in the newspapers.

So do your loved ones a huge favor. If you don’t have a will, prepare one. Your relatives will be happy to know the gold snuffbox will be staying in the family.