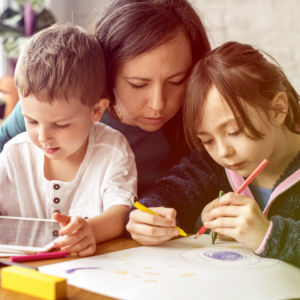 Homeschooling Lobby to Government: ‘Make Sure You Leave Us Alone’

Even with Republicans in power and school choice featured prominently on the national education agenda, a vocal interest group that tends to back small-government conservatives is lobbying against school voucher proposals backed by many on the right.

“What a friendly administration could give, a hostile administration could take away,” William Estrada of the Home School Legal Defense Association told InsideSources. Estrada is the director of federal relations for the Virginia-based group that advocates for parents who choose to educate their children from home.

The Trump administration and the U.S. Secretary of Education Betsy DeVos have called to make it easier for parents to use federal funds to decide where or how their children get educated—including removing them from traditional public schools and sending them to public charters, private schools, or home-schools.

The homeschooling lobby, spearheaded by Estrada, is concerned that a government voucher program, or educational tax-credits, could be modified by future administrations to bring regulations to families that homeschool. While Estrada supports school choice in principle, his group opposes federal involvement in education in any form.

The Home School Legal Defense Association may look like a small group by Washington’s standards—the group only spent about $250,000 on lobbying in 2016—but an estimated 2 million, or over three percent of school-age children, are homeschooled in the United States. The number of homeschool students has risen in recent years, in part as increased access to education technology like personalized learning software has flooded the market.

When activated, the parents of those millions of students can become a formidable political bloc. Homeschoolers were among the coalition of odd-bedfellows that opposed President Obama’s efforts to expand the Common Core through competitive grants. Estrada boasts that the homeschooling lobby can “fight above our weight” because of a deeply engaged grassroots that are willing to put in calls to lawmakers.

In some states, like Texas, homeschoolers do not even have to register with a local school district, said Estrada. He said he would like to see those protections continue, and voucher programs could imperil the status quo in those states by attaching strings to public educational dollars.

“Homeschoolers are one of those very few groups left in our nation who are not receiving government money, who when we meet with members of Congress, we just say ‘make sure you leave us alone, don’t try and subsidize us.’ And it would be unfortunate, I think, if we were to be that last holdout to go on the federal dole,” said Estrada.

Skeptics of the homeschooling movement have argued that without professional educators keeping track of a child’s studies, parents might end up neglecting their children’s education. Critics have also argued that homeschoolers from wealthier families tend to perform better academically than those from low-income backgrounds.

Estrada disputed both claims. He pointed to a 2009 study issued by his organization as proof that homeschoolers perform well academically—no matter their racial or economic background. He also argued that homeschooling is cheap, the study found that the cost of academic materials to homeschool a child is about $500 a year, which is why Estrada said the community does not need voucher support.

He went on to argue that the best way to make sure that children don’t fall through the cracks is to selectively intervene in cases of academic neglect, rather than require every family to register with a local school district—or worse in the homeschooling lobby’s eyes—require every homeschooler to take a state assessment.

Rather than initiating a “crackdown” on homeschoolers and make them “jump through hoops,” a more effective approach to curtailing educational neglect is to “go after the bad actors,” he said.

As the new administration and Congressional Republicans work to enact their school choice agenda, they will need to craft their proposals carefully to avoid stirring up the vocal homeschooling lobby. Estrada and his team have demonstrated once again in recent weeks that they are not afraid to land on the same side as liberal activists to oppose conservative proposals that they believe imperil their educational freedoms.