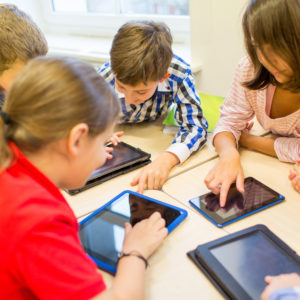 Personalized learning, or the use of technology to custom-deliver a tailored curriculum to each student based on their needs, has long been an area of emphasis and optimism for education policymakers and influencers.

Bill Gates voiced some of that optimism in an April 2016 speech at the ASU GSV summit, in which he stated that education technology had not yet met its full potential.

While Gates urged continued investment in ed-tech products and “deeper engagement” with teachers in product design and testing, he suggested that expensive web-based courseware was not yet a one-size-fits-all solution for the education system. When discussing the challenges of preparing students for the job market, Gates suggested that a better approach involves “a combination of great teachers using the technology in the right way.”

Today, the research arm of the federal Department of Education (DoED) released a report buttressing the marketing claims of one ed-tech product in particular, Odyssey by Compass Learning. Compass Learning was recently purchased by a Scottsdale, Arizona-based company called Edgenuity.

As a result of the acquisition, Odyssey Math itself is no longer on the market, but according to the company, many of the features of the old product have been folded into Edgenuity’s new math software product: “Pathblazer.”

The federal report, issued by the What Works Clearinghouse, a branch of the DoED’s Institute of Education Sciences, states that “Odyssey Math was found to have potentially positive effects on mathematics achievement for primary students.”

The studies the DoED used in its research synthesis are old, two of the three that fully met the full department standards were from the 2000’s, but the researchers still concluded that the product propelled students who used it up by an average of 12 percentile points compared to their peers.

Like other personalized learning ed-tech products, student-users of Pathblazer begin by taking a diagnostic test that measures areas of content mastery and topics where instruction is needed.

Based on a student’s diagnostic test performance, the software uses an algorithm to spit out a lesson plan tailored to the strengths and weaknesses of that individual student. With some products, including Pathblazer, teachers have the ability to intervene and rearrange the lesson plans based on their classroom objectives and student observations.

Many ed-tech proponents do not view sophisticated customizable-learning courseware, on its own, as a panacea to the challenge of educating students.

Instead, “blended learning” proponents, like Arnett, argue for synthesizing ed-tech approaches within a wider framework that includes specific teaching practices, a focused school culture, and a carefully crafted curriculum.

If all the pieces are in place, the vision is to empower teachers with the training and software support to deliver rigorous coursework to each of their students that is at the “cusp” of their level of academic understanding.

Rather than teach to the middle of the class, personalized learning software, in theory, would allow teachers to group students by proficiency level and rotate in-person instruction with online learning to ensure that the needs of their lowest, average, and highest achieving cohorts are each being addressed. Proponents also point to easier data collection and quicker feedback as benefits of the technology.

According to ed-tech watchers, personalized learning initiatives have gotten into trouble when teachers are not properly trained in how to use the products, when the products themselves purport to be adaptable but are actually little more than digital worksheets, and when schools and students lack the technical infrastructure to take advantage of the shift in curriculum-delivery.

Rather than rush into purchasing the latest product, school leaders should start by taking the time to think out a wide-angle plan for how to achieve desired student outcomes, said Arnett in an interview.

The news released today regarding Odyssey Math is a positive sign for those who believe in the promise of education technology to reshape instruction and curriculum delivery.

Arnett, who had not reviewed the DoED report, cautioned that it is often difficult to know how generalizable study findings in this area are, particularly given how hard it is to isolate an ed-tech product’s impact from all the other inputs that affect learning.

Nonetheless, he said it is “very encouraging” that studies meeting federal standards on such widely used software have yielded positive results for students.

At least one challenge that traditionally stood in the way of personalized learning—school infrastructure struggles—is rapidly being surpassed.

The Federal Communications Commission’s E-Rate program, which subsidizes broadband connections to schools and libraries, is credited with having had a major impact on promoting school connectivity in recent years.

In 2016, 88 percent of schools had the Internet infrastructure to support digital learning, up from 30 percent in 2013, according to an Education Superhighway report.

Students from these households are said to have fallen into “the homework gap” because unlike some of their peers, they have to stay on campus after-hours or find free public WiFi to complete their at-home studies.

New Republican leadership at the FCC could herald changes to the FCC’s E-Rate and Lifeline programs.

The future direction of personalized learning is also likely to be impacted by the decisions taken by newly confirmed U.S. Secretary of Education Betsy DeVos.

DeVos, who was confirmed Tuesday after Vice President Mike Pence broke a tie vote in the Senate, spoke favorably of online learning programs, including “cyber-charter” schools, as part of her school choice agenda during her confirmation hearing.

In a written response to Senate education committee questions, DeVos wrote: “High quality virtual charter schools provide valuable options to families, particularly those who live in rural areas where brick-and-mortar schools might not have the capacity to provide the range of courses or other educational experiences for students.”

While DeVos came under fire for overstating the graduation rates of some cyber-charters, and despite the sector facing its share of controversy, many of the online programs continue to grow rapidly as a full-time alternative or part-time supplement to traditional public schooling.

InsideSources has coverage of reaction to DeVos’s confirmation and of the extent of her new powers at the helm of the DoED.