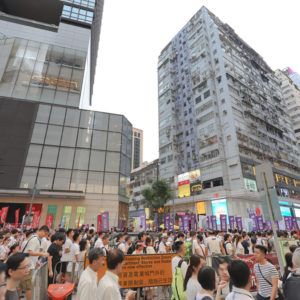 Mass protests on the streets of Hong Kong are provoking distinctly mixed responses in countries that would seem to place the highest priority on democracy.

In Washington, President Donald Trump and many of those involved in the U.S. foreign policy establishment dare not risk ringing endorsements of the protesters and the causes for which they are fighting. Trump, in a trade war with China, wary of China’s rising profile around the rim of Asia, is not going to side enthusiastically with protests in Hong Kong. He already has enough problems with President Xi Jinping over China’s huge trade surplus and military buildup.

The dilemma for Koreans is even worse, perhaps more sharply defined. Yes, more than a million Koreans turned out nightly on the streets of Seoul and other large cities in 2016 waging their Candlelight Revolution against Park Geun-hye, the conservative president who finally was impeached, tried, jailed and convicted for crimes ranging from corruption to influence-peddling. No, just because they demonstrated passionately for Park’s removal and the democratic election of the liberal Moon Jae-in as her successor does not mean they approve of what’s happening in Hong Kong.

Still dedicated to the values of democracy and clean government for which he spoke out during the Candlelight Revolution, President Moon is remarkably silent on the meaning of those fine words and ideals when applied to Hong Kong. Who can blame him? South Korea needs China. For one thing, China is the only country capable of restraining the excesses of North Korea’s leader Kim Jong-un. Moon, doing whatever he can to promote North-South reconciliation, absolutely has to count on President Xi to hold Kim in check, to convince him of the advantages of coming to terms on his nuclear program, maybe to go for a deal that’s acceptable to the Americans as well as everyone else.

If South Korea has so much faith in China as the great peacemaker, the power that historically held sway over the Korean Peninsula, as North Korea’s only ally and the South’s biggest trading partner, then Moon simply cannot say a thing that might be interpreted as endorsing the democracy movement in Hong Kong. Still, one gets the impression, talking to people in Seoul, that many Koreans support the protest in Hong Kong regardless of the silence of their leaders.

Many Americans are conflicted. It would be easy for liberals who dominate U.S. campuses to applaud the sight of demonstrators rebelling against the heavy hand of Hong Kong rulers handpicked and installed by Xi and those around him. From afar, Hong Kong’s status as a former British colony, part of China since “the handover” in 1997 but shielded from direct mainland authority by the terms agreed on by the British and Chinese, would appear sacrosanct.

In American academic circles, in think tanks, liberals who might almost reflexively admire protesters clamoring for their rights are not so sympathetic. Many of them look upon China as the rising world power, an antidote to what they see as heavy-handed U.S. imperialism. A significant number of American intellectuals, particularly at universities, are “pro-North,” supportive of North Korean calls for a “peace treaty” in place of the armistice that ended the Korean War and quick to blame the United States for failing to make concessions to the North while Kim Jong-un refuses to give up his nuclear program.

These American liberals, like Koreans hoping Moon can get along with Kim, are not going to applaud protesters on the streets of Hong Kong when they turn violent. Koreans who marched by the tens of thousands for Moon during the Candlelight Revolution can point with pride to the non-violence of their own movement. In Korea, there were confrontations but no scenes of police and demonstrators attacking one another with fists and clubs as all too visible in TV coverage of the Hong Kong protest.

If revolt in Hong Kong is quite different from that in Korea, it does evoke memories of the crowds that filled Tiananmen Square in Beijing in the spring of 1989. Those demonstrators were not calling for self-rule, as in Hong Kong, but for democracy over all China. Obviously, they failed badly when Chinese authorities sent in the troops, killing and injuring hundreds, and jailing thousands.

Nobody wants that kind of denouement in Hong Kong. Many Americans, so admiring of modern China, and many Koreans, so concerned about China’s influence over North Korea, avoid shows of support for demonstrators crusading for the right to govern themselves. It’s easy to forget these protests are in the name of democratic principles that liberals profess to hold dear.