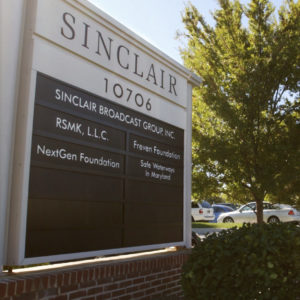 A recent bill from Democrats in Congress could block major mergers in the television broadcast market, like the pending Sinclair-Tribune merger, by outlawing a decades-old loophole revived by the Trump administration.

The ‘‘Local and Independent Television Protection Act of 2017’’ would erase a loophole that currently could allow a combined Sinclair-Tribune to reach 72 percent of American households. That exceeds Congress’s cap limiting any one company to reaching 39 percent of the national broadcast TV audience.

Dubbed the “UHF discount,” the loophole lets broadcasters count only half of the audience reached by stations broadcasting in “ultra-high frequency,” a format considered weak and unreliable in the ’80s when the discount was enacted. Advances in technology have since rendered the discount obsolete, which is why the Obama administration shuttered it a year ago.

That changed in April when Ajit Pai, President Donald Trump’s pick to lead the Federal Communications Commission, reinstated the discount in a round of rules changes aimed at cutting regulation. Now back in place, the loophole lets Sinclair Broadcast Group, already bumping up against the 39 percent national audience cap, only count half the audience it reaches over UHF stations it owns and will own if given permission by the Justice Department and FCC to buy Tribune Media.

On paper Sinclair-Tribune would still sit under the cap, while in reality the company with a history of cutting local newsrooms and content in favor of hard-right political editorials and reports would reach a primetime audience larger than Fox News.

The congressman said the discount “would allow corporations to control the news and other content on hundreds of TV stations around the country.”

In Sinclair’s case that would mean more than 200 stations, including over 130 affiliated with the four biggest broadcast networks in the U.S.: ABC, CBS, NBC and Fox. The stations stretch across more than 100 markets, including 40 of the top 50 in places like New York, Los Angeles, and Chicago, as well as election swing states like Wisconsin, Ohio, and Pennsylvania.

The bill introduced in late July has over a half-dozen Democratic co-sponsors, among them Reps. Anna Eshoo and Ro Khanna of California, Jan Schakowsky of Illinois, and Jamie Raskin of Maryland. Public interest groups like Free Press, Public Knowledge, the National Hispanic Media Coalition, Common Cause, and Consumers Union endorse the legislation.

Several of those same groups launched a campaign to fight the Sinclair-Tribune merger Tuesday with strange bedfellows in the satellite, cable, and wireless industries, who are engaged in a battle over net neutrality rules with the former.

The “Coalition To Save Local Media” says the merger will give Sinclair unprecedented market power to raise prices for its content — a cost eventually passed on to consumers’ cable and satellite TV bills — and exert unchecked, heavily biased influence over local news and programming.

The combination of the two companies would create a broadcasting behemoth with unprecedented control over both the national and local television markets, inflicting tremendous harm to competition and consumers,” said Matt Polka, CEO of the American Cable Association, a trade group representing hundreds of small and rural cable providers across the U.S.

Representatives of similar groups in the wireless and broadband industries echoed those concerns. Jeff Blum, senior vice president and deputy general counsel of Dish Network, said the merger “would create the single largest operator of local broadcast stations in the country” and “jeopardizes both localism and competition, all to the detriment of consumers” by “scaling back local news operations and consolidating, duplicating, or even replacing local news programming.”

Former Democratic FCC commissioner during the George W. Bush administration and Common Cause special adviser Michael Copps added the proposal “should never have seen the light of day.”

“It’s bad for consumers and bad for democracy,” Copps said. “It does nothing for the public interest but everything for big broadcasting.”

Dish, T-Mobile, and Public Knowledge, among others, filed petitions in August asking the FCC to block the deal.