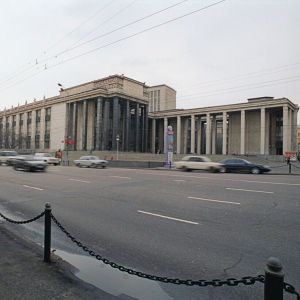 U.S.-Russian relations continue to chill amid strained political and economic sanctions put in place over the Russian annexation of Crimea last year, but a bill up for vote in the House Tuesday could finally see a thawing of a culture and art exchange ban between state-run Russian and U.S. museums, which has been in place since 2011.

The year prior, a U.S. district court judge levied fines of $50,000 a day, or $18 million a year, at the Kremlin for refusing to return a collection of historic Jewish texts known as the Schneerson Collection, which is made up of more than 12,000 books and 50,000 religious documents, and currently fall under the jurisdiction of the Russian State Library in Moscow.

A Brooklyn-based Jewish group known as the Chabad-Lubavitch Hasidic group laid claim to the collection in the early 1990s, and has sought legal recourse in Russia and the U.S. to return them since they were carried back to the Soviet Union from Berlin in the aftermath of World War II. In response to the judge’s 2010 ruling, Russia issued a ban on all art exchanges to U.S. museums the same year, claiming they feared that the U.S. would hold the works at ransom in exchange for settling the dispute.

U.S. officials have insisted since that such seizures are illegal under U.S. law, and on Tuesday the House of Representatives will vote on the Foreign Cultural Exchange Jurisdictional Immunity Clarification Act — legislation that specifically bars the U.S. government from seizing any property belonging to Russian museums over the case.

While museum curators across the U.S. are celebrating the bill in the hope of returning Russian works to their showrooms for the first time in four years, critics say Russia already has the protection it wants in the Immunity from Seizure Act, which places high legal hurdles in front of laying claim to any art loaned for cultural exchange.

Critics, such as Rabbi Yossi Cunin of Chabad-Lubavitch, argue that Russia’s move in 2011 was retaliatory against the U.S. Ending the exchange of art had nothing to do with Russia fearing seizure of historic treasures. Instead says Cunin, it is because Russia was angered that a U.S. court has ordered it to return Holocaust-era looted property.

The bill before the House Tuesday, sponsored by Rep. Steve Chabot (R-OH), would provide Russia with a means of propaganda to begin loaning art to U.S. museums once again, even though its stated reason for refusing to do so is already addressed by U.S. law. The bill would also set a higher bar for any organizations or families who wish to claim Holocaust-era looted art.

In a statement to InsideSources, Congressman Chabot’s office said: “[The Foreign Cultural Exchange Jurisdictional Immunity Clarification Act] is not intended to help Russia or any other foreign nation.  It is intended to increase access for Americans to foreign-owned works of art.  Right now, several nations have concerns about loaning artwork to American museums, and this legislation is attempting to alleviate those concerns.  Nothing in the legislation will impact Russia’s legal obligations to abide by the 2010 judgment and return the collection subject to that litigation.”

“Russian art and culture are world treasures that the American people should experience firsthand,” says Cunin. “But, as desirable as this is, exchange and education shouldn’t trump justice.”

Giuseppe Macri contributed to this report.